Chavez, who was to have presided over the Latin America and Caribbean Summit on Development and Integration next week, is recovering from surgery in Cuba; there has been little information about his illness. 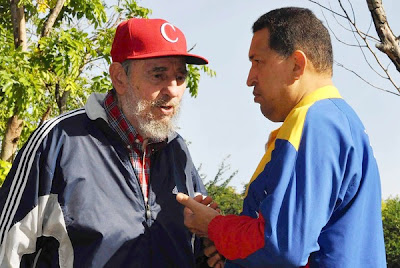 Fidel Castro of Cuba, left, and Venezuela's President Hugo Chavez speak Tuesday in an unknown location in Havana, shown in this photo released by Granma newspaper. Chavez underwent surgery in Cuba on June 10 and little has been revealed about his illness.


Reporting from Caracas, Venezuela, and Bogota,— Casting more uncertainty on the health of President Hugo Chavez, Venezuela's Foreign Ministry announced Wednesday that it has canceled a summit of foreign leaders scheduled for next week that Chavez was to have presided over to mark Venezuela's bicentennial independence celebration.

The ministry statement said the Latin America and Caribbean Summit on Development and Integration would not be held because Chavez is in a "process of recuperation and extremely strict medical treatment" in Cuba.

The summit, set for July 6-7 on Margarita Island, was to have followed a massive state celebration still scheduled for Tuesday to mark the nation's 1811 independence. It is not known whether Chavez will return by Tuesday.

Since announcing that Chavez had undergone surgery in Cuba on June 10 to remove a "pelvic abscess," the Venezuelan government has said nothing about the nature of his illness or when he might return. The lack of information has led to speculation on the nature of Chavez's illness and whether he will be able to resume his duties or run for reelection next year. Officials have denied that Chavez has cancer.

Venezuelan and international news media have had little to report in recent days, except for such comments as the cryptic remark last weekend by the president's brother, Adan Chavez, that followers of the nation's leader should be ready to take up arms to defend the revolution. He did not elaborate or suggest against whom.

On Tuesday, the Cuban government released a video showing Chavez, appearing healthy if a bit thinner, talking with Fidel Castro in Cuba and showing a Tuesday copy of the Cuban state newspaper Granma.

There had been talk that Chavez would return home in time to preside over the summit and host various regional leaders, including Brazilian President Dilma Rousseff and Argentine President Cristina Fernandez de Kirchner. The government statement Wednesday said that the summit would be rescheduled before the end of the year.