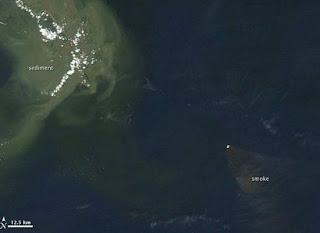 A team was trying to determine whether the substance was actually oil, how much was spilled and where it came from, a Coast Guard spokesman said. He declined to predict what the findings would be.

"It's too early," the spokesman said.

"The Coast Guard has opened and is using the Oil Spill Liability Trust Fund to begin mobilizing assets to quickly address the situation," the news release said.