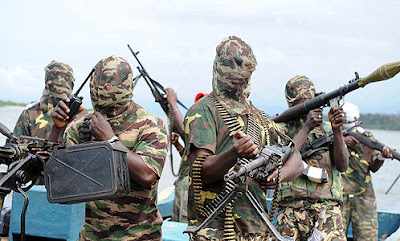 Port Harcourt — After several weeks of lull, due to the last general elections, the Movement for the Emancipation of the Niger Delta (MEND) said it would soon commence its promised attacks on oil and gas installations in the Niger Delta.

The militant group also said it would not spare soldiers guarding such oil and gas facilities in the region, saying, it would henceforth destroy all investments owned by the ENI group, a subsidiary of the Italian oil giant, the Nigeria Agip Oil Company (NAOC) across the country.

In an electronic mail signed by MEND's spokesman, Jomo Gbomo and obtained by Daily Champion, said the group is outrage by the alleged 'involvement of the ENI group of Italy in the attacks on the innocent citizens of Libya by western nation's intent on plundering the mineral resources of that nation'.

It accuses the ENI group of actively participated in the theft of oil in the Niger Delta for decades, as well as assisting the Nigerian military in its scorched earth and genocidal actions against the justice seeking citizens of the region, describing the ENI and its subsidiaries as 'thieves and cheap opportunists'.

The group said the ENI and other oil companies in Nigeria should not be misled by the seeming calm in the creeks of the Niger Delta, pointing out that it is preparatory for a violent attack.

The statement reads in part, "Why have these western nations ignored the bombing of villages and civilians in the Niger Delta by the Nigerian military? If they are so concern about the removal of dictators in Africa why do enjoy good relationships with dictators in Angola and Equatorial Guinea ?

"In solidarity with the oppressed people of Libya we vow this day to hence forth pursue the complete destruction of all investment owned by ENI group in Nigeria and urge all around Africa to do likewise.

"ENI and other oil companies in Nigeria should not be misled by the seeming calm in the creeks of the Niger delta as it is mere preceding a very violent storm.

"The movement for the emancipation of the Niger delta (MEND) and other groups in the delta has no respect for Jonathan or his class of moronic African leaders who gladly serve as stooges to western governments.

"Since when did France obtain their rights to decide who rules in Ivory Coast or Italy , Libya ? Why are elections in western nations not supervised by the African Union? Clearly these countries have no respect for Africa or its rulers and rightly so.

"This has been further demonstrated by the disdain with which president Jacob Zumas attempts at Peace in Libya have been treated by the west. Zuma has presented himself like every other African dictator, rather than seeking a global leadership role for South Africa in descending that previously great nation to the depths of countries such as Congo ,Nigeria and Angola .

"All companies looting the Niger delta should steal as much as they can, while they can, for the end to the oppression, slavery and plundering of the Niger delta is nigh," the statement posited.
Posted by Crude Oil Daily at 11:36 AM