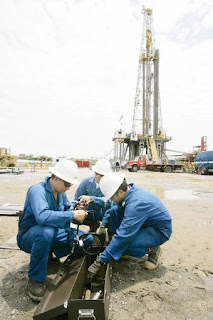 COTULLA, Texas – Bill Cotulla's hand rests on the handle of his great-grandfather's cane, his gravelly voice recounting the changes in the small town his ancestor founded and named for himself some 130 years ago. Almost overnight, it has transformed from a South Texas backwater to the hub of a major oil boom.

"You can't be choosy," the 75-year-old muses, considering the expanse of new RV parks, hotels and restaurants. "The oil companies that are putting up buildings are keeping nice yards."

For generations, Cotulla has been a town where even the paved roads had the aura of the dusty, saloon-lined paths from old Western movies. Cowboys, ranchers and shop owners tied their livelihood to the hunting season. Young people left to escape double-digit unemployment and poverty rates.

Now, the challenge is all the people pouring in. Cotulla, about 90 miles south of San Antonio, and nearby towns are rushing to house hundreds of workers and approve plans for apartment complexes and industrial parks to keep up with the development of the Eagle Ford shale formation, one of the most plentiful new oil fields in the country. After several years of preliminary work, the project is fully under way and sales tax revenues are soaring. Municipalities are paving roads, laying water lines and creating parks while trying to avoid being overextended when the boom tapers off.

"There's still more people coming," said Jerry Cox, owner of JJ's Country Store, a restaurant and convenience store on the main highway that runs through the town. "It's like Davy Crockett at the Alamo. You gotta think, are they ever going to stop coming?" he added, referring to the onslaught of Mexican soldiers who overwhelmed the fort.

The economic transformation is the result of a new drilling method, hydraulic fracturing, combined with horizontal drilling, that allows companies to extract oil and gas from impermeable layers of shale. Major industry players have joined the Eagle Ford project, including Anadarko, Range Resources and Shell. Chesapeake Energy of Oklahoma City signed a multi-billion dollar deal with the Chinese state-owned oil company to raise cash to drill in the shale.

No solid estimate of likely production has been made, but the American Petroleum Institute said the field should yield billions of barrels of oil. The project already supports 12,600 fulltime jobs, and by 2020 could account for $11.6 billion and nearly 68,000 jobs in a 24-county area, according to study in February by the University of Texas' Center for Community and Business Research.

Initially, some residents were skeptical about the windfall. In this barren land of mesquite trees, cactus bushes, rattlesnakes, feral hogs, coyotes and bobcats, oil booms_ the real ones_ always happened elsewhere. But the fat bonus checks and royalties rolling in to mineral rights' owners have changed attitudes.

Cox renovated the kitchen in his restaurant and put down new flooring. He desperately wants to hire at least six people. A friend who began building a Best Western on the Cotulla highway had all the rooms booked before construction was complete. People are driving around town in new cars.

Larry Dovalina, interim city administrator of Cotulla, home to barely 3,500 people, said new requests for water and sewer services are coming in daily. The power system is overburdened. Sales tax revenue rose from $445,000 in 2009 to more than $600,000 last year.

Some residents, like Mariane Hall, manager of the Cotulla Chamber of Commerce, are worried about possible side effects from the boom, especially ground water contamination. The development uses a technique known as fracking, which injects chemical-laced water into the shale to push out the minerals. Environmental groups and the Environmental Protection Agency have expressed concerns about the method. But the industry insists it is safe, and residents generally say they'll rely on federal and state agencies to enforce environmental regulations and provide oversight.

Similar booms have happened in other shale regions — most notably Pennsylvania, North Dakota, Wyoming and Montana. In the places with mostly natural gas, however, production is slowing as the price of natural gas drops.

In South Texas, oil courses through the Eagle Ford's geologic layers — just as the price per barrel lingers at or above $100.

The area, home to barely a half-million people in some three dozen counties, has been one of the nation's poorest. Several counties have poverty rates over 30 percent — three times the national average.

At times, Martin thought she might have to close. The store relied on online sales and the hunting season, when hundreds descend on the area for its white-tailed deer.

Now she knows she should stay open later and on weekends but can't find enough employees. "It's just been amazing from no activity to ...," Martin says, gesturing at the commotion in the small shop packed with cowboy boots and plaid shirts, along with the steel-toed boots and flame resistant clothing coveted by the oilfield workers.

Sixteen miles north, Dilley, sits just off the shale. Yet plans for a 60- to 90-room hotel have been approved, city administrator Melissa Gonzalez said. Three RV parks are going up. Recently, a man offered to buy the town's airport.

Forty miles away in Carrizo Springs, 72-year-old Doris Jackson's RV park has grown from 42 units to 125 in the past two years. The supermarket is packed and runs out of food. She has one well and is getting thousands of dollars in royalties every month. And she's about to get a second well on her property.

"What are we gonna do with all that money?" Jackson says shaking her head. "I'll still buy my clothes in the second-hand shop like I've always done."
Posted by Crude Oil Daily at 10:41 AM