Nigeria’s Crude Oil Theft: Shell Et’al And Their Half Truths? 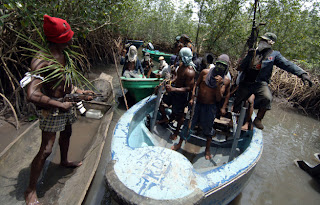 Even the federal government knows and had publicly acknowledged that Nigeria on daily basis loses huge volumes of its produced crude oil to thieves thriving unhindered across the nation’s coast lines especially in the Niger Delta and Lagos areas. However, recent declaration by Nigeria’s biggest foreign operator in the oil and gas industry, Shell Petroleum Development Company of Nigeria (SPDC) in its 2010 briefing that the nation has continued to lose billions of dollars through significant volumes of the country’s crude oil production lost to thieves that thrive in illegal export of the commodity smacked of insincerity on the side of the foreign operating oil companies.

Federal Government’s deliberate indifference to tackle the problem which out rightly falls within the purview of financial crime and crime against humanity as it imparts indirectly on the lives of the already battered Nigerian masses also called to question its sincerity and our seriousness as a nation. The story: Massive stealing of crude oil from producing companies’ facilities especially flow-lines in the onshore and near-shore Niger Delta has increased despite reduction in violence by militants in the area.

Apart from losing volumes of produced oil and condensate valued at several millions of dollars on daily basis, the activities of the thieves leave the production facilities of these oil companies in constant state of disrepair thereby incurring huge maintenance cost on the NNPC joint venture partners. The activities of the thieving groups also result in huge oil spills and consequent impact on the environment. Shell stated in its briefing notes that its operations in 2010 alone suffered 155 reported incidents of crude oil theft that involved vandalism, oil spills, and fire.

According to the company, “Barges take stolen oil to tankers waiting offshore for export. There is also a massive illegal refining business based on stolen crude oil. All this has reduced the amount SPDC is producing, created environmental and social problems from oil spills and reduced government’s revenue that could have been used to develop infrastructure and services.” It is interesting that government seems to be looking the other way while this heinous crime against the collective good of this nation goes on daily with such impunity that makes it look as if the government -people are the ones directly involved. From all indications, both the government and the foreign operators may not be telling us the whole truth.

For instance, Shell in its briefing note said actual quantity of crude oil stolen in 2010 from its facilities in the Niger Delta was not certain because of disharmony in figures advanced by various sources. This was an outright deceit by Shell. The question is: which other source does the company depend on to get exact figures of its crude oil production and thus extrapolate the exact volume loses to thieves? This was where the deceit came in the supposed revelation and Shell is not alone in this mischief.

All major operators in Nigeria are guilty of this corporate delusion either because of their complicity in the entire business of crude oil stealing or inappropriate accounting for the produced oil. Except they are afraid of implicating highly-placed individuals in and outside government, how can the companies feign they don’t know the volume they loose on daily basis to thieves and the final destination of the stolen oil. Shell said it produced in 2010 an average of 960, 000 barrels per day (bpd) of oil. So the question is: was that the cumulative volume the company expected from all its producing wells? If not, the difference would have given an idea of the real volume lost to oil thieves.

All oil producing company including Shell know the exact volume that comes out from any oil well except the well is shut-in (closed). So if they know what they produce from all the wells within their oilfields, they should with exactness know the volume expected to arrive every flowstation before going to the export terminals. The oil wells were completed to flow at given and definite rates whether steady or staggered. The difference between what comes out from battery of wells in any field and what arrives at the flowstation will give the exact volume of produced crude oil lost between the wellhead and the flowstation. This is simple enough to calculate.

If the stealing were on flowlines rather than wellheads, the same calculation goes for the gap between the volume at the flowstation and whatever quantity received at the export terminals. So what is difficult in working this out to give the real Nigerian people the actual volumes stolen on daily basis so that they can in real terms appreciate the enormous lose this nation incurs on daily basis to a few privileged individuals or gangs. Operating oil companies particularly those that have onshore/near-shore production facilities have maintained that crude oil stolen from their facilities were normally taken by tampering with flowlines except in few cases where wellheads were directly tapped. So let’s begin to tell ourselves the bitter truth.

Both the federal government’s representative in the oil business, NNPC and the foreign oil companies know what they are doing. This is the truth. The issue of crude oil theft or rather inappropriate accounting of produced oil was part of the mischief played into what’s now called the “final” Petroleum Industry Bill (PIB) currently at the National Assembly awaiting passage into law and ultimately Presidential assent. This was highlighted in previously published piece: “Ambushed PIB: Mischief Vs Genuine Oil and Gas Reform,” where it was stated that the spirit of genuine reform in the nation’s oil and gas sector has been compromised by those who have been partnering to jointly defraud Nigeria.

From the original PIB, the proposal to measure crude oil production volumes at wellhead rather than at distribution terminals was criminally expunged so that oil producing companies can continue to tell us that half the volume they produced was lost to oil thieves along the road to the export terminals. If the proposal was not clandestinely removed, it would have undoubtedly ensure transparency in crude oil volume accounting and effortlessly expose the reckless thievery of produced crude oil in this country.

Over five percent of the country’s total crude oil outputs are estimated to be stolen from Nigeria's Niger Delta every day plus the additional volumes used as feedstock for over 100 village-level illegal refining business that is booming unhindered across the oil areas.
The case of condensate is even worse as most people don’t even know that this resource is produced in this country almost as much as oil and interestingly, as it’s the practice, condensate is not part of the calculation for Nigeria’s OPEC daily production quota allocations. Nigerian security agencies in 2010 alone arrested 187 people and seized 20 tankers, 28 barges and 38 other boats used in transporting stolen crude oil to the oil tankers stationed offshore.

The question: Who are these people and who are they working for? Every tanker, boat or barge is well registered somewhere in this country or even outside. So who owns these vehicles and the village-sized oil receptor marine vessels/tankers that receive Nigeria’s stolen crude oil farther offshore from our coastline? Does it mean the security agencies don’t interrogate those arrested if for nothing, to gather intelligence to help unravel the real culprits behind this illicit business?

All we are even talking now are crude oil loses from onshore and near-shore production facilities. Nobody has ever bothered to find out what is happening at the several floating production and storage facilities scattered in the nation’s offshore arena.
Neither the Department of Petroleum Resources (DPR) nor NNPC (NAPIMS) have any clue to what actually goes on in the nation’s offshore oil production and storage platforms. Is this not pathetic?

Ifeanyi Izeze is an Abuja-based consultant on strategy and communication(iizeze@yahoo.com)
Posted by Crude Oil Daily at 3:57 PM