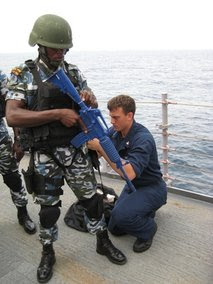 Nigeria's military has taken control of security in the northern city of Maiduguri after bombs Sunday killed at least 25 people. Our correspondent reports on the militant group thought responsible for the attack.

“This kind of attitude, this kind of unwarranted carnage, that is what we are here to stop," said Nwaobo. "We need the cooperation of each and every one of us, including the local populace. On our part, we will do what we can to win back the public confidence.”

The bombing is thought to be the work of the Islamic militant group Boko Haram, but no one has yet claimed responsibility. A Boko Haram spokesman did not respond to text messages asking about the attack.

The group has claimed responsibility for the bombing of national police headquarters in the capital Abuja earlier this month and the bombing of a beer garden in the city of Bauchi following last month's inauguration of President Goodluck Jonathan.

Boko Haram, whose name means “Western education is sinful,” has also been blamed for numerous attacks in Maiduguri targeting police, government officials, and religious leaders. The sect first came to public attention in 2009, when security forces killed hundreds of its members while putting down a violent uprising aimed at creating an Islamic state in northern Nigeria.

In an interview with Nigeria's Daily Trust newspaper before the Maiduguri attack, Boko Haram spokesman Abu Zaid said the federal government is asking his group to disarm while security forces have violated past agreements and are rearming. He quoted the Prophet Muhammad as saying, “A believer should not allow himself to be attacked twice in one place.”

The spokesman said the group is pursuing a sovereign land under Islamic law which might then engage in dialogue with what he called “the country of the unbelievers.” He said the group will continue to pursue past governors of northern states who called out forces against them.
Posted by Crude Oil Daily at 10:54 PM