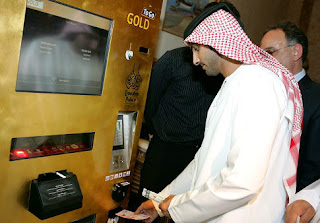 With the dollar linked to gold, the Fed would no longer manage the money supply. But others would, like South African gold miners.

Recently, I found myself at a mall on a particularly hot day in Boca Raton on the prowl for a cold soda. Imagine my surprise when, instead of finding a vending machine that offered beverages in exchange for dollars, I found one that dispensed gold bars. As I marveled at the machine, my thirst momentarily forgotten, I realized I hadn’t brought nearly enough cash with me to purchase the $1,550 gold bars on offer.

Seeing our newfound mania for gold displayed in such a novel fashion got me thinking about the idea of a return to gold as a basis for the dollar. With continually mounting concerns about the federal debt, we all hear this idea championed frequently.

On the surface, linking the dollar to gold is an attractive idea. After all, a gold standard constrains inflation by limiting the creation of dollars to the pace of gold production. In turn, it acts as a disincentive for governments creating soaring deficits since it prevents the printing of more money to repay those debts.

•Pay Cuts for Those Who Remain Employed During Recessions. In the event of a recession, those who remain employed would more than likely face pay cuts. Currently, rate cuts by the Federal Reserve to increase the money supply have helped to ease the pain in current and prior recessions and maintain wages.
Clearly, under a gold standard, money supply increases would be out of the question, which means something else would have to give for businesses facing the crunch of a recession. Instead, prices would likely need to fall, including the price of labor, which would bear the brunt of the pain in times of economic stress.

•More Prevalent Periods of Inflation and Deflation. Forget about steadier prices under a gold standard. Obviously, with the dollar linked to gold, the Fed would no longer manage the money supply. But others would, like South African gold miners.

If there was a big discovery of gold, this would result in more dollars being created resulting in inflation. Alternatively, if there was a drop-off in gold discoveries, the growth in the money supply would slow, curbing the expansion of commerce, tightening credit availability, and slowing economic growth.


Ultimately, let’s not lose sight of the fact that the amount of gold in the ground is finite relative to the demonstrated enormous potential for human innovation, value creation and growth, potentially leading to long-term deflation…and perhaps, even further down the line, a curb to the amount of innovation and entrepreneurial effort people may be willing to undertake.

•Increased Difficulty to Get A Loan. Certainly, people are well justified in criticizing the excessive lending of the past decade, but imagine a system in which it is nearly impossible for all but the largest, most profitable and most credit-worthy institutions to obtain loans.

This would be a probable outcome of a gold standard, because linking the dollar to gold is incompatible with our fractional reserve banking system. Since depositors do not need all of their money all of the time, banks lend some of it out while holding a fraction in reserve to meet the regular cash flow needs of depositors and against losses on the loans. By doing this repeatedly they expand the amount of dollars and credit available to borrowers.

Under a fixed link to gold, regulated banks would not be able to both attribute dollars to the account of a depositor and lend them out to borrowers. All of this translates into a substantially reduced ability to make loans. In the US, banks create in loans many times the amount that they have in deposits. A link to gold could mean that credit available in the banking system could be cut by well more than half.

•Greater Banking System Instability. Under a gold standard, the banking system might be even more prone to crisis and instability than it already seems to be. Unregulated bank-like entities could offer a higher return to investors than banks by profitably investing their surplus deposits. This could attract a lot of assets from the regulated banking system and could turn into a dangerous pyramid-like scheme in tough times when investments fail. If this sounds like an overly speculative premise, bear in mind that this exact form of financial crisis happened repeatedly in the UK when the money supply was linked to gold in the 19th century.
It’s not unusual for people to think about resurrecting old ideas as new solutions for current problems. Equally important, precious metals investment vehicles have a rightful place in many portfolios.

In lieu of a direct link between our currency and the yellow metal, if you want to exchange your dollars for gold, you can easily do so through a number of increasingly popular investment vehicles – or just a quick trip to the mall.

But when it comes to bringing back the gold standard, caveat emptor. Chances are good none of us will get quite what we bargained for.