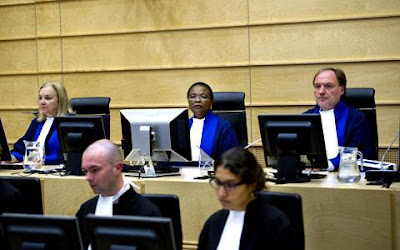 Judges Sylvia Steiner, Sanji Mmasenono Monageng, and Cuno Tarfusser, back row, from left, are seen in the courtroom in The Hague, Netherlands. The International Criminal Court (ICC) has issued arrest warrants for Libyan leader Moammar Gadhafi, his son and his intelligence chief for crimes against humanity in the early days of their struggle to cling to power, Monday June 27, 2011
http://www.voanews.com/english/news/africa/International-Court-Issues-Warrant-for-Gadhafi--124589309.html

Judges at the International Criminal Court issued arrest warrants on Monday for Libyan leader Moammar Gadhafi and two of his most trusted lieutenants on war crimes charges.

Warrants issued for Gadhafi and others

The decision came after ICC Prosecutor Luis Moreno-Ocampo had asked for warrants for Gadhafi, his son Seif al-Islam and the head of Libyan intelligence, Abdullah al-Senussi.

Moreno-Ocampo says Gadhafi and his government carried out attacks against demonstrators, and ordered snipers to fire on civilians leaving mosques during the crackdown against rebels seeking Gadhafi's ouster.

Presiding judge Sanji Monageng said there are "reasonable grounds to believe" that the Libyan leader and his son are "criminally responsible" for the murder and persecution of civilians.

Gadhafi's government denies targeting civilians, instead accusing NATO of doing so during air strikes in support of Libyan rebels.

Meanwhile, witnesses in the Libyan capital, Tripoli, say they have heard two loud explosions and could see smoke rising from the area near Gadhafi's Bab al-Aziziya compound Monday.

Rebels in Libya's western mountains said Sunday they have advanced and are battling government forces in a strategic town 80 kilometers southwest of Tripoli.

Opposition commanders said fighting on the outskirts of Bair al-Ghanam follows weeks of intense clashes in the Nafusa Mountains that have pushed government troops steadily back toward the capital.

The town is significant because it is only 30 kilometers from Zawiya, a key western gateway to Tripoli and home to a crucial oil refinery. Opposition forces seized Zawiya in March before pro-Gadhafi fighters retook the city.

Tunisia's state news agency said Monday three Libyan government ministers, including Foreign Minister Abdelati Obeidi, are holding talks with "several foreign parties" on the Tunisian island of Djerba. It did not give further details about the meetings.

Late Sunday, Gadhafi's spokesman remained defiant, insisting the Libyan leader "is leading the country. He will not leave. He will not step down."

Gadhafi has run Libya for 42 years, but is being pressured to cede power by rebels who rose up against his rule and by a NATO-led bombing campaign.
Posted by Crude Oil Daily at 11:25 AM