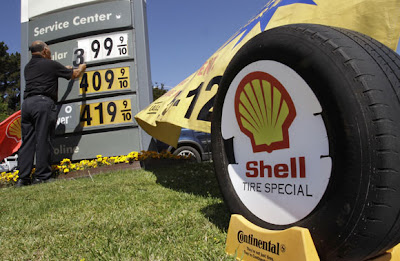 A Shell employee changes the price at a gas station in Menlo Park, Calif. The International Energy Agency announced Thursday that it will release emergency oil stockpiles to combat high prices around the world. (Associated Press / June 21, 2011)
http://www.latimes.com/business/la-fiw-oil-20110623,0,5669175.story
Bloomberg News

The U.S. and 27 allies will release emergency oil stockpiles through the International Energy Agency for the third time in more than three decades as the war in Libya chokes global supplies.

The release of 60 million barrels, or 2 million barrels a day of oil over 30 days from the end of next week, will be coordinated by the IEA, the Paris-based agency said today in a statement. Crude prices plunged. The move comes 15 days after the Organization of Petroleum Exporting Countries failed to reach an accord on production increases at a meeting in Vienna. Iran's OPEC governor said the IEA is "interfering."

"The consumer-producer dialogue is going to run into some troubled waters," said Harry Tchilinguirian, head of commodity- markets strategy at BNP Paribas SA in London. "Stocks are only a short-term bridge to supply outages. If Saudi Arabia is prepared to fill the gap, the need for a stock release is lessened. This reduces Saudi incentive to increase production."

Nobuo Tanaka, the IEA's executive director, told reporters in Paris that high oil prices are damaging the economy of every country. U.S. Federal Reserve officials yesterday cut their forecasts for growth and employment this year and next, pushing crude prices lower earlier today.

"The situation is getting tighter and tighter" following the loss of 132 million barrels because of conflict in Libya, Tanaka said. "We are very much convinced that if we don't act the price spike could happen."

The release equates to about two-thirds of global oil consumption for one day. The U.S. will provide 30 million barrels of the total from its Strategic Petroleum Reserve, while European members will supply about 20 million barrels and Asian nations the remainder, the IEA said. Agency members collectively hold 1.6 billion barrels of emergency inventories.

Oil futures fell further after the announcement. Brent crude for August settlement tumbled as much $8.49, or 7.4%, to $105.72 a barrel, the lowest since May 6, on London's ICE Futures Europe exchange.

"The market, which is well-balanced at the moment, is now going to be oversupplied," Iranian OPEC governor Mohammad Khatibi said by phone from Tehran. Oil prices will fall as IEA adds supply to the market, he said. This year Iran holds OPEC's rotating presidency.

Saudi Arabia pledged on June 8 that it and three other Persian Gulf states would keep consumers sufficiently supplied in the absence of an OPEC accord. The kingdom will increase production to 10 million barrels a day next month, from about 9 million, al-Hayat newspaper reported on June 10.

The IEA said that while it "welcomes the announced intentions" to make up for lost Libyan output, additional supplies will take time to reach global markets where summer demand for driving fuels is rising and so the agency has decided to "complement the actions of these key producers."

It is the third time the IEA has coordinated the use of emergency stockpiles since the agency was founded in 1974. The first was during the 1991 Persian Gulf War and the second when Hurricane Katrina damaged oil rigs and refineries in the Gulf of Mexico in 2005. The IEA is an energy policy adviser to 28 industrialized nations including the U.S., Japan and Germany.

The release will weaken prices of Brent crude more than the U.S. benchmark, West Texas Intermediate, causing the spread between the two grades to narrow from near-record levels, according to consultants Petromatrix GmbH in Zug, Switzerland. Brent was at a premium of $16.94 a barrel to WTI today.
Posted by Crude Oil Daily at 11:31 AM