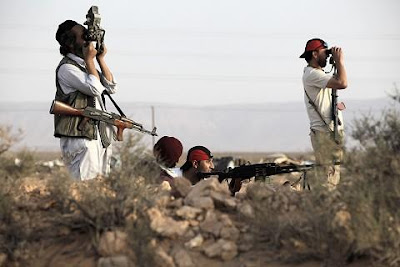 Rebel fighters patrol in the desert south of the Libyan rebel-held town of Chakchuk in the Western Mountains, some 160 km (99.4 miles) southwest of Tripoli, June 4, 2011.

Libyan rebels have pushed into a Western Mountain town besieged by forces loyal to Libyan leader Moammar Gadhafi, as NATO continued to carry out airstrikes around the Libyan capital, Tripoli.

Rebels on Monday say they have taken over the town of Yafran, about 100 kilometers southwest of Tripoli. Pro-Gadhafi forces attacked the Western Mountain region when locals rose up against Gadhafi's more than 40-year rule.

Media members report that they see no government forces left in the town. Instead, locals are flying rebel flags and have destroyed images of the Libyan leader.

Meanwhile, NATO warplanes kept up pressure on the Libyan leader, targeting Gadhafi's command and control centers overnight in and around Tripoli. NATO also reported airstrikes against Libyan military targets near the oil town of Brega.

British Foreign Secretary William Hague told reporters in London Sunday that the campaign against pro-Gadhafi forces is intensifying. But he rejected suggestions that it has strayed from the U.N. mandate to protect civilians.

Hague defended the use of British and French attack helicopters, which were employed for the first time on Saturday. But Russian Deputy Prime Minister Minister Sergei Ivanov warned that use of the helicopters puts NATO "one step" closer to a ground operation.

Russia abstained when the U.N. Security Council voted in March to establish a no-fly zone over Libya. It has repeatedly called for a negotiated solution to the conflict.

Special Russian envoy Mikhail Margelov is due in Benghazi Monday, where he plans to meet with members of the rebel Transitional National Council.
Posted by Crude Oil Daily at 11:15 AM