OPEC ready to act if needed, split was over data 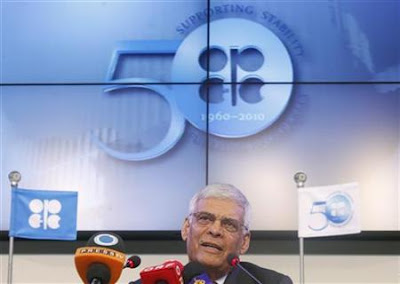 OPEC Secretary General Abdullah al-Badri addresses a news conference on the occasion of the 50th anniversary of OPEC in Vienna September 14, 2010.
http://www.reuters.com/article/2011/06/09/us-opec-idUSTRE7582C620110609
By Alex Lawler and Barbara Lewis

(Reuters) - Economics, rather than politics was behind the collapse of this week's OPEC talks and the group as a whole would act if it grew worried about oil supplies running short, a top OPEC official said on Thursday.

"Now we are unhappy that we did not reach a decision but this is not the end of the world," OPEC Secretary General Abdullah al-Badri told Reuters. "It was not political, it was really an economic situation."

"Of course, for the past six years we have enjoyed a very relaxed atmosphere, now we have some tension. I hope we will overcome it."

Numbers compiled at the OPEC headquarters in Vienna had implied the market needed around 2 million barrels per day (bpd) more oil for the third quarter of this year and 1.5 million bpd for the fourth quarter, Badri told a World Economic Forum conference.

But he said some of the 12 members of OPEC had different numbers and were unable to agree on any need for more oil, even though oil prices are trading far above $100 a barrel.

For now he said the market was comfortably supplied.

"There is plenty of oil on the market. Stocks are very high, about three days above the five-year average," Badri said.

"We have to watch the market very carefully. If we see the market is imbalanced or some drastic things happen, we will alert our member countries."

After Wednesday's meeting fell apart, leading OPEC member Saudi Arabia, holder of most of the world's surplus oil production capacity, said it would provide as much oil as the market needed.

"Saudi Arabia is trying to put more oil on the market, but no-one is buying it," Badri said.

He said over the course of OPEC's 50-year history, OPEC meetings had failed to reach agreement before. One instance was in 2000 when Iran refused to sign up to a decision and reacted to what it saw as undue U.S. pressure for more oil.

Iran and the upsurge in political tension associated with this year's Arab world unrest was again seen by analysts as the root cause of Wednesday's OPEC upheaval.

Badri would not be drawn on a precise price target, saying OPEC no longer had one, but he implied the need for relatively high prices.

The range previously backed by OPEC of around $75-$85 had, he said, been made obsolete by rising inflation, notably higher food costs.

Arab world unrest had added a roughly $15-$20 a barrel premium, he said, and also repeated his long-held criticism of speculation and taxes, arguing they boosted international futures prices and prices at the pump, respectively.

"The G7 (Group of Seven industrialized nations) is making more money from our exports than the member countries. When prices go up, if we increase production, they should increase tax," he said.

This year's oil price rally to a high above $127 a barrel for Brent in April piled the pressure on OPEC to raise formally an output target last revised in December 2008.

Badri said he had received a telephone call from Nobuo Tanaka, head of the International Energy Agency, before the OPEC meeting.

Badri referred to Tanaka as "my friend," but said: "I wish they (the IEA) would stop talking to us before the meetings.
Posted by Crude Oil Daily at 5:26 PM