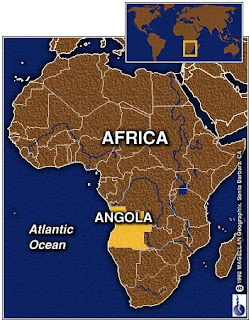 By Emma Farge and Ed Stoddard

LONDON/JOHANNESBURG, June 6 (Reuters) - Angola is set to overcome technical problems to boost oil output to over 2 million barrels per day (bpd) next year and has the potential to overtake Africa's top oil producer, Nigeria.

Angola briefly replaced fellow OPEC member Nigeria in the number 1 spot in 2009, but patchy production in some fields and relative peace in the Niger Delta have reversed their standing.

Oil exports for the first seven months of this year showed a difference of around 460,000 bpd between Nigeria and its closest African rival, according to Reuters data based on provisional loading programmes.

But analysts say the dip in Angolan output is temporary and likely to be reversed as fresh supplies come onstream in the next two years and deepwater exploration accelerates.

"We expect next year for there to be upwards of 2.2 million bpd and (Angola) could overtake Nigeria. There might have been a bit of a decline but it's just temporary," said Martin Kelly, an analyst for sub-Saharan Africa at Wood Mackenzie.

The news will come as a relief to customers in Asia and the United States of the country's mostly sweet crudes and to those seeking alternative supplies given Middle East turmoil and a near halt in exports from third-largest African producer Libya.

The government will also welcome this development as over 90 percent of the country's export income comes from oil. But the sector employs less than 1 percent of its people, and the benefits have generally gone to the secretive governing elite.

One factor that has capped production this year has been technical problems at the offshore Plutonio field, a joint project between BP and Sonangol Sinopec International.

Water injection problems have cut output to under 100,000 bpd. But after a near four-month partial outage, BP said Plutonio would return to full production of 170,000-190,000 bpd sometime in July.

Analysts expect the start-up of two major projects within the next year to more than offset the closure of the Exxon Mobil-operated Xicomba field and effectively wipe out the gap between the two countries.

The Total-operated Pazflor, meaning passion flower, and BP's PSVM offshore fields are both due to produce first oil in late 2011 and together with the extra Plutonio output this would add 470,000 bpd once they reach full capacity.

Investors are also hoping deepwater exploration will prove to have the same potential as Brazil following the award of licences earlier this year to explore for oil beneath a layer of rock in the seabed, known as pre-salt.

"Deepwater has played a big part in Angolan oil industry. We don't expect to see the type of backlash in west African countries that you have in the United States," said Justin Jacobs, analyst at Business Monitor International, referring to the BP oil spill which occurred at similar depths.

Angola also has some inherent advantages over Nigeria.

Nearly all of Angola's oil output is offshore and its most exciting immediate growth projects are in deepwater.

In Nigeria, about a quarter of its production is from deepwater while the rest is from onshore or shallow water, leaving it subject to both militant attacks and claims from the local population for a greater share of oil wealth.

Niger Delta tensions and the risk of militant raids on oil facilities have subsided in recent months but many investors still deem this to be an underlying risk.

"It's pretty hard to offend a community offshore," said an investor in the west African upstream market.

Nigeria is set to export 2.05 million bpd in July.

Most of Nigeria's future output growth is seen coming from offshore but uncertainty over its Petroleum Industry Bill (PIB) has stalled billions of dollars of investment needed for such projects from oil majors such as Royal Dutch Shell and Exxon Mobil.

While much of Angola's production comes from its restive enclave of Cabinda, extraction lies offshore and separatist rebels there have been mostly subdued by a battle-hardened military regarded as one of the most fearsome in Africa.

"The Cabinda conflict remains contained and although one of the separatist groups recently threatened oil interests there is nothing to suggest offshore assets would be vulnerable," said Alex Vines, an analyst with UK-based think-tank Chatham House.

Still, one factor that could limit the production potential of both countries is OPEC targets but analysts said poor compliance levels are making these increasingly irrelevant.

Angola has transparency issues that can raise concern among shareholders of companies doing business in the country.

"The bidding rounds for oil exploration and production blocks in not readily available. This results in suspicion of political favouritism in how these blocks and related subcontracts are allotted," said Paul Bugala, a senior sustainability analyst with U.S.-based Calvert Investments. (Additional reporting by Nick Tattersall in Lagos; editing by James Jukwey)
Posted by Crude Oil Daily at 12:18 PM