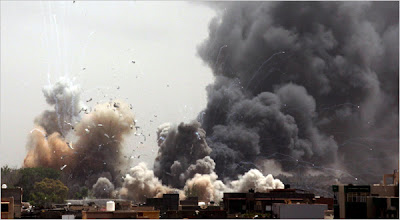 An explosion on Tuesday at the complex that includes Col. Muammar el-Qaddafi’s residence.
http://www.nytimes.com/2011/06/08/world/africa/08tripoli.html

TRIPOLI, Libya — NATO warplanes dropped bombs in repeated low-flying raids Tuesday on targets in and around Col. Muammar el-Qaddafi’s compound in their most intense daytime strikes on the Libyan capital since the aerial campaign began two months ago


What appeared to be bunker-busting bombs laid waste to an area of about two acres, leaving a smoking, twisted mass of the steel remains of six or seven buildings that had stood three to four stories high.

Officials said that 10 to 15 people had died in the attack, but there was no way to verify that number. Western reporters taken to the area late in the afternoon by Libyan government handlers saw one body that had been pulled from the rubble. The authorities identified the remains as those of a man serving as a housecleaner.

“Who’s going to look after his children?” said one of the Libyan officials directing the tour, who refused to give his name. “Who is going to take revenge on Obama, Cameron and Sarkozy?”


There were no signs of rescue efforts, because of the difficulties of getting heavy equipment through the rubble, the officials said.


While the attack ended by mid-afternoon, NATO planes were still circling overhead, drawing nervous glances from the Libyans. But the planes seemed to be reconnaissance craft, and Western reporters had notified NATO officials of the impending tour of the destroyed area.

Among the ruined buildings was a grand reception house and accompanying V.I.P. guesthouse where the South African president, Jacob Zuma, had been received in early April on a brief diplomatic mission on behalf of the African Union. But that attempt proved fruitless, as did a second effort a week ago , because Colonel Qaddafi rejected any deal under which he would leave the country. The NATO attacks have been increasing in frequency since the second peace plan foundered.

Up until Tuesday, most NATO aerial attacks on Tripoli have been carried out during the night hours. NATO officials have been saying they would be increasing the pace and intensity of the attacks on targets linked to Colonel Qaddafi and his military forces as part of an effort to oust him from power and stop his forces from attacking civilians who have joined the organized revolt against him.


The special envoy to Africa for the Russian president, Dmitri Medvedev, arrived in the rebel capital of Benghazi on Tuesday with a similar mission, Reuters reported. The envoy, Mikhail Margelov, said he would try to establish a dialogue between Libya’s warring factions, but it seemed likely that his effort would founder on the same diplomatic shoals as Mr. Zuma’s.

Colonel Qaddafi’s regime has become increasingly isolated as the conflict has dragged on, beset by increasing numbers of high-level defections and evidence that support for him even among residents of Tripoli, his stronghold, has become fractured. On Tuesday, Libya’s labor minister, Al-Amin Manfur, added his name to the growing exodus, declaring at a meeting in Geneva of the International Labor Organization that he was now supporting the rebel government, the National Transitional Council, Agence France-Presse reported.
Posted by Crude Oil Daily at 12:12 PM