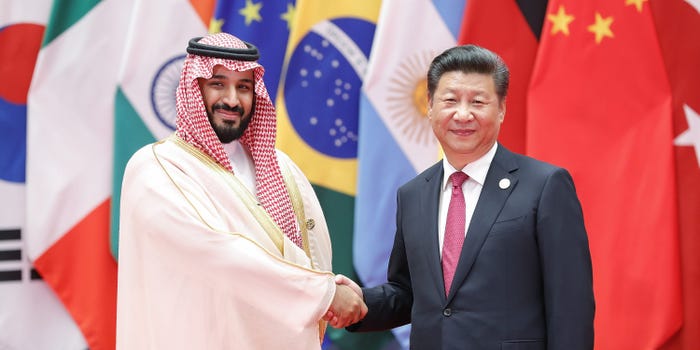 The world's top oil exporter and the world's biggest oil importer could shake up the US dollar's dominance in the global petroleum market.

Saudi Arabia is in talks to sell oil to China and be paid in yuan instead of dollars, according to a Wall Street Journal report.

About 80% of global oil sales are done in dollars, and Saudi Arabia has conducted its deals exclusively in the greenback since 1974. So if a Saudi-yuan deal were to be made, it would bolster China's currency at the expense of the dollar as Beijing looks to challenge US leadership in financial markets.

The likelihood of a potential deal between Saudi Arabia and China has picked up recently, according to the Journal. The longtime Mideast ally has grown unhappy with the US due to the Biden administration's reluctance to do more in the Yemen civil war and its push to revive the Iran nuclear deal.

In 2020, Biden also promised to make Saudi Arabia a "pariah" over the murder of a journalist. And since becoming president, he has made it clear that he doesn't consider Saudi Arabia as an ally, but rather as a partner.

What's more, Saudi Crown Prince Mohammed bin Salam reportedly rejected a request for a call with Biden to discuss Ukraine and boost oil production amid the West's sanctions against Russia.

Meanwhile, China leaned on Saudi Arabia as its primary crude supplier last year. And economic relations between Saudi Arabia and the US have dwindled, since the US has become less dependent on Saudi oil in recent years as domestic shale production boomed.