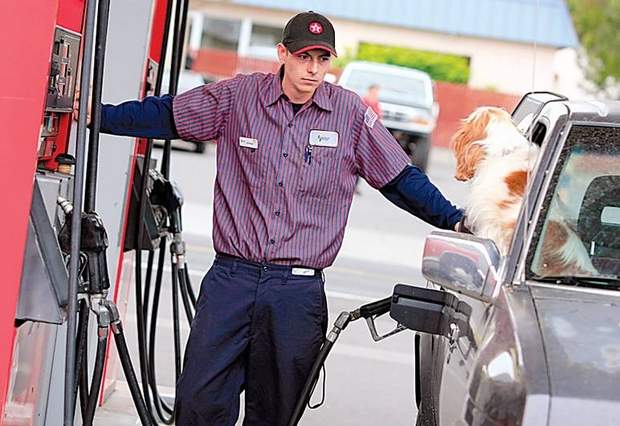 New Jersey, whose residents are prone to brash talk and aggressive driving -- useful skills in the most densely populated U.S. state -- are saying no way to lawmakers’ attempt to allow self-serve gasoline.

Last week, for what seemed like the zillionth time, lawmakers introduced a bill to end New Jersey’s status as the only state that prohibits motorists statewide from filling their own tanks. A Rutgers-Eagleton poll found that 73% of residents prefer to have an attendant do it for them, while 22% said otherwise.

Among women, the preference is even starker: 87% want the perk, while 55% of men do. Indeed, cottage industries have sprung up selling T-shirts, magnets and handicrafts that say “Jersey Girls Don’t Pump Gas.”

Entire generations of Garden State residents don’t know how to do it themselves: The state has required an employee to dispense since 1949, on the belief that customer use was dangerous. Few customers tip the attendants, who work outside in every sort of weather. In 2006, a lawmaker proposed a one-year self-serve pilot program so customers could get the hang of it. The bill died without so much as a committee hearing.

Oregon, the only other state with a self-serve ban, relented a bit in 2015 for stations in low-population areas. Current legislation there, though, would end broad mandatory full service.

Rutgers polled 1,044 adults from Feb. 25-March 4, as gasoline prices were heading to record highs amid Russia’s military invasion of Ukraine. The poll has a margin of error of plus or minus 3.5 percentage points.

Governor Phil Murphy -- a native of Massachusetts, a state whose own gasoline hang-up until 2015 was a ban on pump clips that allow hands-free dispensing -- is reluctant to take a firm position on the bipartisan bill, which would allow stations to offer self- and full-serve.

“That’s been sort of a political third rail in New Jersey which I have not historically crossed,” Murphy, a 64-year-old Democrat in his second term, said in Trenton on March 5.

His predecessor, Republican Chris Christie, in 2016 said his administration had “polled this over and over” to massive opposition, and had received advice to avoid the matter completely from his mentor, former Governor Tom Kean, who left office in 1990. In 2006, when Democratic Governor Jon Corzine said it was “worthy of debate” when a bill was introduced.

At that time, supporters said drivers could save as much as 5 cents per gallon, as stations would pass on labor savings to customers. This time, the savings could be three times more, according to the New Jersey Gasoline-Convenience-Automotive Association.

Gerald Cardinale, a Republican lawmaker who served in both the Assembly and Senate, sponsored the failed pilot program. He had regularly pitched similar measures, filing his first one in 1981. He died 40 years later with state residents still prohibited from filling their own tanks.