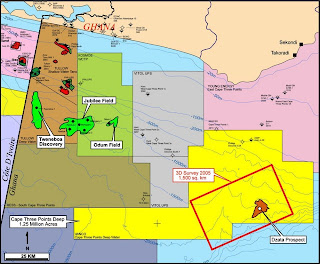 SHARES in Tullow Oil slumped yesterday amid reports that the oil and gas explorer may cut its production guidance following troubles at a number of its projects this year.

The Irish-led company, which is now listed primarily in London, is expected to hit its output plateau at its Jubilee oil field off Ghana in December rather than August, as had originally been planned. Tullow has also faced drilling delays in Kenya, Ghana and French Guiana.

Tullow is likely to reduce full-year extraction guidance to below 90,000 barrels a day, said Dragan Trajkov, an oil and gas analyst at Renaissance Capital in London.

"While the delay at Jubilee is unexpected, more serious to Tullow would be any impact on the field's estimated resources arising from the later target," he said.

Tullow will provide an update with its first-half results on August 24.

The Jubilee delay "is a concern because as you move forward, a higher proportion of Tullow's production base is due to arrive from" it, said Gerry Hennigan, an analyst with Goodbody Stockbrokers. Some exploration issues are beyond Tullow's control, he added.

Last month, Kosmos Energy, Tullow's partner in Jubilee, said it might delay drilling of an exploration well off Ghana to the fourth quarter after problems with the rig it was to use.

In May, Tullow and partners -- including Royal Dutch Shell and Total -- delayed the completion of an exploration well off French Guiana until August because of drilling disruptions.

Tullow and Anadarko Petroleum suspended exploration off Ivory Coast in February because of political unrest in the country. At the same time, Tullow is proceeding with drilling of exploration wells in some west African nations and beyond.

"The second half of 2011 sees Tullow drilling some material exploration wells in Liberia, Sierra Leone, Guyana and starting with the Zaedyus result in French Guiana this month," said Richard Griffith at Evolution Securities in London.

"If the markets don't recognise this potential, industry may do so instead."

Tullow closed down 8pc in Dublin at €11.38. The stock lost 7.1pc in London. It is down 17pc this year. (Additional reporting, Bloomberg)

- Peter Flanagan
Posted by Crude Oil Daily at 7:51 AM