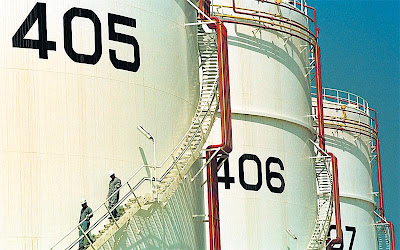 Storage and refining facilities across the US are beginning to reopen after storm surges and heavy rains, caused by Hurricane Irene, hit the Atlantic coast over the weekend.


The bad weather has affected the Sunoco tank farm, which stores oil, as floods swept through the 335,000 barrel-a-day refinery and closed the crude distillation unit in Philadelphia. The company is yet to confirm whether it has reopened.


The Kinder Morgan pipeline along the eastern coast was also affected when the storm caused power cuts to the area although work was carried out on the pipeline, which transports 600,000 barrels a day between Greensboro, North Carolina and Washington, so it is now back in operation.


Kinder Morgan has also reopened its terminal in Perth Amboy, New Jersey, and its terminal on Staten Island in New York. However, the terminal in Carteret is still out of operation because of damage caused by the storms, Nasdaq reported.
Posted by Crude Oil Daily at 11:47 AM