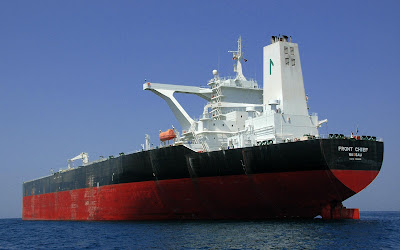 http://www.bloomberg.com/news/2011-08-15/asia-to-cut-west-africa-oil-imports-to-41-cargoes-in-september.html
By Sherry Su
Asian oil refiners plan to reduce West African crude imports for next month by 18 percent to 41 cargoes, 9 fewer than August, according to a survey of seven traders involved in the transactions.
Shipments totaling 39.4 million barrels, or 1.31 million barrels a day, will be exported from Angola, Nigeria and the Republic of Congo in September, according to the poll and an analysis of loading programs obtained by Bloomberg News. That compares with 47.6 million barrels, or 1.54 million barrels a day for this month.
Chinese refiners will import 24 cargoes, unchanged from August, while Indian processors bought nine shipments for September, down from 17 this month, according to the survey.
Indian Oil Corp., the nation’s largest refiner, purchased five cargoes for loading in September, compared with 13 this month, the survey showed. The company plans to shut part of its Mathura plant in northern India for about 20 days in September, two people with knowledge of the schedule said on March 30.
The August program was revised to 50 cargoes from 49 previously.
Most Nigerian and many Angolan grades are trading at higher premiums to North Sea Dated Brent, used to price more than half of global oil, from a month ago.
Nigerian benchmark Qua Iboe was at a premium of $2.83 a barrel to Dated Brent on Aug. 4, the highest since June 1, compared with an average of $1.96 in July, according to data compiled by Bloomberg News. The grade was yesterday at $2.81 more than the benchmark.
Nigeria plans to export 2.23 million barrels a day of crude next month and Angola will ship 1.67 million barrels, Bloomberg calculations based on loading programs showed.
The following table shows details of planned Asian imports of West African crude. Each cargo ranges from 950,000 barrels to 1 million barrels.
To contact the reporter on this story: Sherry Su in London at lsu23@bloomberg.net.
To contact the editor responsible for this story: Steve Voss at sev@bloomberg.net.
Posted by Crude Oil Daily at 8:13 AM