Nigeria’s Oil, Gas Reserves Declining at About 12% a Year 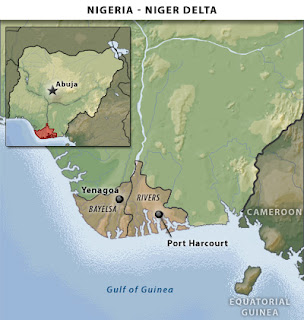 Nigeria’s oil and gas reserves are declining at as much as 12 percent a year, with production from onshore and shallow-water oil fields having reached their peak, Petroleum Minister Diezani Alison-Madueke said.

Africa’s largest oil producer plans to boost deep-water production through measures including the passage of a new oil industry law before the end of this year, Alison-Madueke told reporters today in Abuja, the capital. Nigeria needs to take a “pragmatic approach” in the new legislation to address concerns by international energy companies that the new law will hand too much profit and control to the state, she said.

Nigeria missed its target to boost reserves to 40 billion barrels and raise output to 4 million barrels a day by 2010. Total crude oil and condensate reserves fell 4.8 percent to 37.16 billion barrels from 38.76 billion barrels in 2010, according to the Department of Petroleum Resources, the country’s oil industry regulator. Oil exploration in Nigeria slumped to the lowest in a decade after producers including Royal Dutch Shell Plc and Total SA backed away from investing until the country’s petroleum law is passed.

A new law that will change the way the oil industry is funded and regulated, will be given “speedy passage” when parliament returns from a six-week recess in September, Alison- Madueke said.

To contact the reporter on this story: Elisha Bala-Gbogbo in Abuja at ebalagbogbo@bloomberg.net

To contact the editor responsible for this story: Dulue Mbachu at dmbachu@bloomberg.net
Posted by Crude Oil Daily at 11:09 AM