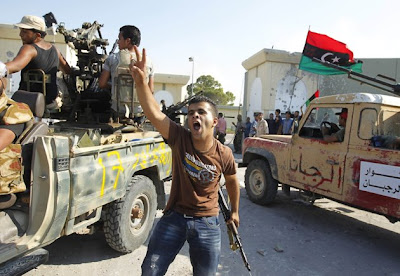 Opposition fighters poured into the area by the hundreds, although the joy was tempered by shooting elsewhere in the large. sprawling compound, indicating that Gadhafi's forces were putting up resistance elsewhere.

But the rebels clearly seized the momentum, swarming around Gadhafi's former residence, which had been hit by a 1986 U.S. airstrike in retaliation for a bombing attack on a German disco in which two U.S. servicemen were killed. One man climbed onto a statue of a clenched fist crushing a U.S. fighter jet that had been erected after the strike.

Several rebels, in a show of contempt for the man who ruled their vast North African nation for more than 40 years, placed a head seized from another statue under their feet and kicked it. One happily lifted it above his head while his comrades danced and yelled joyfully around him.

The heavily fortified complex, which has been heavily damaged by NATO airstrikes since the six-month civil war began, is the most defining symbol of Gadhafi's nearly 42-year rule and its occupation, a day after the rebels swept into the Libyan capital with stunning speed, comes as the opposition faced pockets of resistance and fighting rocked the capital.

An Associated Press reporter at the scene said the compound's green gates were blasted open and hundreds of rebels were pouring into the complex, some driving golf carts as the area resounded with celebratory gunfire.

It was not immediately clear whether Gadhafi or members of his immediate family were in the compound when it was breached by the rebels, but the ferocity of the battle led many to speculate that the maverick leader may have been inside.

Abdel-Aziz Shafiya, 19, walked down one of the main roads of the compound with a rocket-propelled grenade launcher in one hand and a Kalashnikov in another. The teenager, who is from the embattled city of Misrata, said he felt "an explosion of joy inside."

"I lost friends and relatives and now I can walk into Gadhafi's house," he said. "Many of my friends have died and now all of that meant something."

The battle for Bab al-Azizya, in which mortars, heavy machine-guns and anti-aircraft guns were used, came hours after Gadhafi's son and heir apparent, Seif al-Islam, turned up free to thwart Libyan rebel claims he had been captured and rally supporters.

His surprise appearance underlined the potential for Gadhafi to strike back even as his grip on power seemed to be slipping fast.

Kirsan Ilyumzhinov, the Russian head of the World Chess Federation who has known Gadhafi for year, also said he spoke Tuesday by telephone with Gadhafi and the Libyan leader remains in Tripoli.

Ilyumzhinov, who was received by Gadhafi in Libya in July, said in an interview with the Interfax news agency that Gadhafi called him at around 6 p.m. Moscow time (1400 GMT, 10 a.m. EDT) on Tuesday and told him that he was "alive and well and still in Tripoli."

The report couldn't be independently confirmed.

Mahmoud Shammam, a Doha-base spokesman for the rebels' interim council, was more cautious.

"We don't know who is inside Bab al-Aziziya. We believe that there is someone there and that he is leading a fierce battle. It is a symbol. This is the final castle of Gadhafi," he said.

Street battles between pro-Gadhafi troops and rebels also broke out elsewhere in the city. Thick clouds of gray and white smoke filled the Tripoli sky as heavy gunfire and explosions shook several districts of the city of 2 million people.

NATO warned the situation in Tripoli remains very dangerous and promised the alliance will continue bombing forces loyal to the 69-year-old Libyan leader if they keep fighting.

"Snipers, shelling, missiles could do much damage, but they can't change the course of history or the outcome of this campaign," spokesman Col. Roland Lavoie told reporters at a news conference in Naples, Italy. He said NATO had to stay vigilant because of fluidity of the situation on the ground.

"Most notably, Tripoli is still the site of numerous clashes between pro- and anti-Qadhafi forces, and the tension is far from being over. The situation in Tripoli is indeed very, very dynamic and complex, even today, and we are closely monitoring developments hour after hour," he said.

NATO officials in Brussels said the alliance's warplanes were flying over Tripoli on Tuesday, but that there have been no bombing runs.
Posted by Crude Oil Daily at 1:21 PM