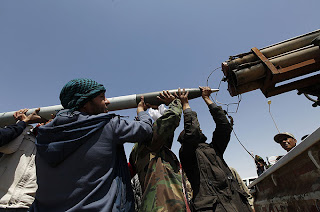 Libya’s biggest oil terminal, which previously loaded about 450,000 barrels a day, has been damaged during fighting.


According to Reuters, black smoke was seen billowing out of a tank situated at the Es-Sider oil terminal and a witness said it was believed to have been hit by a rocket.


The storage facility, which holds about 6.3 million barrels, did not have anyone working on the premises at the time.


Most of the oil stored comes from the Sirte Basin containing fields which are operated by Total and Eni.


The fire was thought to have burned for a few days and after Gaddafi's forces withdrew from Tripoli last week it is uncertain as to when the terminal will be in operation once again.
Posted by Crude Oil Daily at 11:57 AM