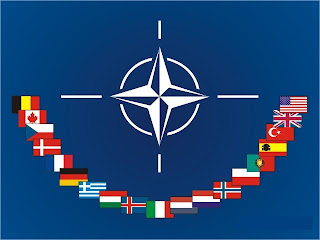 NATO is looking into reports that a son of Muammar Qaddafi died in the Libyan town of Zlitan, where the alliance struck two targets yesterday. A government spokesman denied he’d been killed, Al Arabiya television said.

The information minister of the Libyan rebels’ National Transitional Council, Mahmoud Shammam, said its forces had unconfirmed reports that Khamis Qaddafi died in a raid on Zlitan, about 50 kilometers (30 miles) west of the rebel-held port city of Misrata on the Mediterranean coast.

North Atlantic Treaty Organization aircraft hit an ammunition storage area and a military-police facility late yesterday in Zlitan, the alliance said in an e-mailed statement from mission headquarters in Naples, Italy. Pro- and anti- Qaddafi forces have been battling for control of the town as the rebels seek to advance toward the capital, Tripoli.

“NATO does not target individuals and takes all allegations about civilian casualties very seriously,” NATO said. “We are looking into it, as we always do.”

Khamis Qaddafi, the youngest son of the Libyan leader, commands the government’s elite 32nd brigade, which the U.S. military said in March had as many as 10,000 soldiers, possessed some of the best equipment and acted as the “primary regime protection element.”

Part of the initial NATO missile assault on Qaddafi’s forces in March was focused on Khamis’s military unit. NATO has targeted the brigade’s headquarters south of Tripoli, while rebels accuse it of carrying out several assaults on Misrata.

Previous reports of Khamis Qaddafi’s death went unsubstantiated. Qaddafi’s son was one of 33 members of the government forces killed in an early-morning NATO raid, the Associated Press reported, citing a rebel spokesman.

Shammam, speaking by phone from an undisclosed location outside of Libya, said that although there was a “strong feeling” among rebels that Qaddafi’s son had been killed, “nobody has seen the body; nobody has seen the actual scene.”

To contact the editor responsible for this story: Patrick Donahue in Berlin at pdonahue1@bloomberg.net; Mariam Fam in Cairo at mfam1@bloomberg.net
Posted by Crude Oil Daily at 11:29 AM