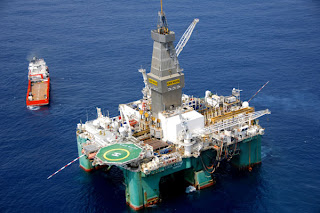 Output from the Jubilee field off the coast of Ghana has helped Tullow Oil generate record revenues.
http://www.gtglobaltrader.com/news/jubilant-tullow-oil-reveals-record-profits-thanks-ghanas-jubilee
By Eric Jackson
Tullow Oil has provided one of this year’s most successful Anglo-African trade arrangements.
The British company has announced record half year profits ­- a massive jump to $330m from $89m in the same period last year - and doubled its dividend to shareholders on the strength of its business in Africa.

And in a further boost to shareholders it has revealed that it is set to finally complete a deal in September with Total and Chinese National Offshore Oil Company (CNOON) for oil production in Uganda.
Chief executive Aidan Heavey said: "We have delivered a strong performance and achieved record results in the first half allowing us to double the dividend.
“We continue to make good progress with production plans in both Ghana and Uganda, and while delays to the farm-down to CNOOC and Total have been frustrating, we now expect completion in September.
“With a strong balance sheet, growing production and a potentially transformational drilling campaign to come, we move into the second half of the year with real confidence."
Tullow’s record sales results of over £1bn were driven by increased production from the Jubilee field in Ghana and higher commodity prices.

Exploration and appraisal success continued and the group strengthened its portfolio with farm-ins in East Africa and two strategic acquisitions, and in July the group listed Tullow Oil plc shares on the Ghana Stock Exchange following a $72.3m offer.
The company said that it had seen a 71 per cent exploration and appraisal success for the year with the completion of farm-ins to six blocks in Kenya and Ethiopia and the first well to spud in Kenya.
Jubilee production in Ghana is expected to increase to 105,000 barrels of oil a day (bopd) in October, and a plateau production of 120,000 bopd is now expected before the end of the year.
The $2.9bn sale and purchase agreements signed with the Ugandan government for the farm-down to CNOOC and Total to develop the country’s oil reserves in the Lake Albert basin is now expected to be completed in September.
The company said it anticipates spending up to $10bn in developing the field, especially on construction of a refinery and a pipeline to the East African coast, as it expects to produce around 20,000 barrels per day for the local market by 2015.
The Africa-focused explorer said it expected to release drilling results from its highly anticipated exploration campaign in offshore French Guiana in September.
Off the coast of West Africa, Tullow has interests in 10 blocks across Sierra Leone, Liberia, Ivory Coast and Ghana.

In May, Tullow broadened its North Sea portfolio by snapping up Nuon Exploration and Production, a Netherlands-based North Sea oil and gas company, for €300m.
Posted by Crude Oil Daily at 10:30 AM