There’s Gold in That Scrap 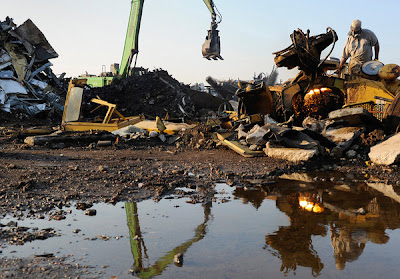 It was 9 a.m. but already sweltering when Dave Petersen pulled his red pickup truck into S. D. Richman Sons Inc., a scrap-metal yard in Philadelphia’s industrial northeast. In the back of his truck were two old hot-water boilers, a rusty mattress frame and several lengths of outdated cast-iron pipe. “I’m a plumber, and the work is slow, so my plumber friends put me onto scrap,” Petersen said, his T-shirt soggy with sweat. “I brought a load yesterday and got $154. I expect to get about a deuce for this.”

In the scrap-metal industry, Petersen is known as a peddler, and his presence here is proof of the catholic nature of S. D. Richman Sons. It buys from the many (any legitimate source who has steel, iron, copper, aluminum or brass) and sells to the few (mills that melt the old metal to make new metal). When the scrap comes in, it’s cleaned, sorted into piles and cut down to size, with either a torch, a baler or hydraulic shears. Then about half is shipped to mills in the U.S. and the rest sails to places like China, Korea, Taiwan or especially Turkey, which makes most of the steel used in the Middle East. “We bring the [expletive] in, we clean the [expletive] up and we send the [expletive] out,” said David Richman, a spry man of 64 with wire-rim glasses and a white beard. He added, “Clean up the expletives.”

Richman is the quirky, brainy owner of the company, founded more than a century ago by his great-grandfather, a Russian Jew who went door to door with a horse and wagon, buying scrap. Richman’s parents didn’t necessarily want him to enter the family business, but after graduating from the University of Pennsylvania and getting a graduate degree in labor relations at Michigan State, Richman found that he missed the challenges of the yard, and now he runs the business with his brother, Bruce.

At 10:40 a.m., in the low, bunker­like office at the center of the yard, Richman was multitasking: eating a plum, taking notes in pencil, haggling on the phone. “That guy’s an acquired taste,” he said, hanging up after one call, “and I haven’t acquired it yet.” He muttered a quote from “Through the Looking-Glass”: “ ‘The time has come,’ the walrus said, ‘to talk of many things. . . .’ ”

Out in the yard, the sun glinted off piles of metal stretching almost as far as the eye could see. Kevin Maguire, the plant manager, explained that this place may look like a vast spread of trash, but it’s actually a recycling facility. Fueled by building booms in China and India, the price of scrap metal is at near-historic highs — more than $400 for a gross ton of steel, $4 a pound for copper — so the magnet of global capitalism pulls the scrap into Maguire’s yard. (This is why you don’t see hulks of cars or abandoned refrigerators on the streets anymore. A junk car is about $350 in scrap; a junk refrigerator, $20.)

Unfortunately, the magnet also pulls in other things: heroin addicts climbing the fence to steal stuff, journalists (Richman to me: “I’m not entirely sure why I let you in here”) and fly-by-night competitors who drive down margins. Maguire says that there are six other scrap yards within a five-mile radius; while some, like S. D. Richman Sons, strive to identify and reject stolen material, others stay open all night, catering to junkies. Would they spend three days, as Maguire recently did, disassembling a 25,000-pound M.R.I. machine? Standing next to a Gehry-like tangle of aluminum shards, Maguire shook his head and explained, “They’re not scrap men.”

As morning gave way to afternoon, the flow of scrap continued. A crane-operated grappler lifted steel into a truck destined for Claymont Steel, a Russian-owned mill in Delaware. A young man in a tank top arrived in a truck full of aluminum lighting rails from a Target that was being renovated. “That’s all this guy does,” Richman said, “is drive around the country gutting out Target stores.”

And the peddlers kept pouring in: a shirtless man looking like Sammy Hagar gone to seed, several men with complicated biceps tattoos. After they unloaded, they stepped up to a glass window in the office and received a cash payment. An elderly Italian peddler walked away with $97 for a load of scrap iron. He gestured unhappily at his pickup truck. “Ehhhh,” he said, “it was $80 to fill it with gas.”

When it was Dave Petersen’s turn, a woman handed him a yellow ticket and a thin stack of cash. He examined the ticket: $309.60. “I set a new record,” Petersen said. “Between that and the $154 yesterday, I just made my week’s pay.”
Posted by Crude Oil Daily at 12:40 PM