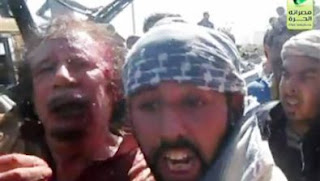 New video footage that emerged Friday shows a bloodied and beaten Muammar Qaddafi pleading for his life before asking the fighters who captured him, "Do you know what's right or wrong?"

The question could well have been the final words of the ousted Libyan dictator, though there remain conflicting reports over what Qaddafi may have said before he died.

The new video shows the former strongman apparently in his last moments, repeatedly telling the mob swarming around him, "What you are doing is forbidden in Islamic law."

A rebel is heard responding, "Shut up you dog," as the armed fighters fired celebratory bullets in the air.

The footage ends with Qaddafi telling them, "What you are doing is wrong ... Do you know right from wrong?"

The irony of his plea would not be lost on the thousands of Libyans who suffered under Qaddafi's tyrannical 42-year regime, or the international community which laid the blame for a long list of atrocities at his door, most notably the 1988 Lockerbie bombing that killed 270 people, mainly Americans.

Qaddafi was killed shortly after his capture Thursday amid the final assault by Transitional National Council (TNC) forces on his hometown of Sirte, but the latest footage only added to the confusion about the exact circumstances of his death.

Interim Libyan Prime Minister Mahmoud Jibril announced later Thursday that Qaddafi was fatally injured after being caught in crossfire between his own supporters and rebel fighters.

Other reports, and several videos that have since emerged, have cast doubt on that claim. Yet another account suggested Qaddafi was shot by his own bodyguards.

International human rights groups, including Amnesty, and the UN human rights chief Navi Pillay have urged an investigation to clear up the facts, but the manner of his death seemed to matter little to the Libyans who celebrated through the night in preparation of a new dawn in the troubled North African country.

Qaddafi's death means the transitional government in Libya can avoid a long trial and proceed quickly with plans to declare the country "liberated" as soon as Saturday, and set up a new administration in the capital, Tripoli, without threat of an insurgency led by the former dictator.

The TNC can rely up on the support of its allies, including Britain and France which led the NATO mission to support the anti-Qaddafi cause, and the US.

Secretary of State Hillary Clinton pledged ongoing commitment to start building a democracy in Libya, during a Friday news conference in Pakistan.

"The death of Colonel Qaddafi has brought to a close a very unfortunate chapter in Libya's history but it also marks the start of a new era for the Libyan people," Clinton said.

"I want to underscore the commitment of the United States to supporting the Libyan people as a friend and partner as they embark on this new democratic path," she added.

The immediate future of the NATO mission in Libya remains to be decided. Ambassadors from the 28-nation military alliance were due to meet in Brussels at 3:00pm local time (9:00am ET), with the French president Nicolas Sarkozy already indicating Friday that the NATO operation was "coming to its end."

Qaddafi's remains will be buried at a secret location, a TNC official announced Friday, saying the ceremony had been delayed for "a few days."

Newscore contributed to this report

Read more: http://www.foxnews.com/world/2011/10/21/video-reportedly-surfaces-showing-qaddafis-last-words-do-know-right-from-wrong/#ixzz1bQTa02I3
Posted by Crude Oil Daily at 10:21 AM