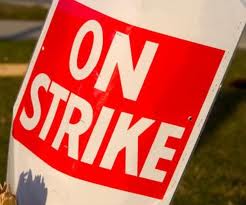 ABUJA, Nigeria,(UPI) -- Oil workers in the Niger Delta said they will stay out on strike until the Nigerian government does more to address security issues in the region.

Babatunde Ogun, president of the Petroleum and Natural Gas Senior Staff Association of Nigeria, told the Platts news service the strike would last until at least Wednesday.

Ogun said there were several kidnappings in recent weeks in some of the major oil hubs in the Niger Delta.

"The lives of our workers have been endangered and we cannot continue like this," he was quoted as saying.

Last week, the Trade Union Congress of Nigeria said the increase in violence across the country was cause for concern.

"The numerous bombings and wastage of lives and property going on in the northern states of Nigeria by the Boko Haram sect are unacceptable," it said in a statement.

Boko Haram is suspected of having ties to al-Qaida. The militant group took responsibility for an August attack on U.N. offices in Abuja.

Amnesty offered to Nigerian militants in the Niger Delta in 2009 brought some relief for the oil sector though theft has cost the country around 200,000 barrels of oil per day.
Posted by Crude Oil Daily at 9:57 AM