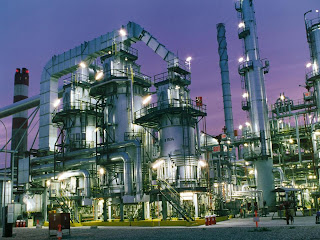 Oil refinery stocks slumped Tuesday with mounting evidence of a collision between a sustained rise in the price of crude and a decline in demand for energy.

That puts refiners in a very tough position. They are paying more for their stock material, oil, while at the same time they are unable to demand higher prices for their finished product, whether it is kerosene, gasoline, or jet fuel.

Optimism, at least compared with last month, about stability in Europe and the U.S. have pushed crude price steadily higher in October. Benchmark U.S. crude prices rose 2.5 percent Tuesday after jumping 4 percent the day before. In afternoon trading, prices reached $93.52 per barrel, the highest level since early August.

Yet demand is moving in the opposite direction, particularly with the summer driving season in the U.S. vanishing in the rearview mirror. Gasoline futures fell about 1 percent Tuesday to $2.65 per gallon.

Demand is not just lower in comparison to last year, either. MasterCard SpendingPulse, which tracks retail gasoline purchases in the U.S., says drivers have cut back on spending at the pump for nearly eight months in a row.

A similar situation arose in the lead up to the recession, when many consumers were already cutting back on spending even as oil prices hit record highs close to $150 per barrel.