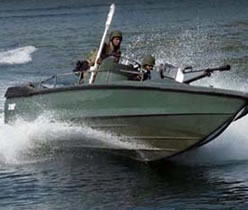 Four new vessels to augment the fleet of the Ghana Navy have arrived at the Home Port of the Western Naval Command.

With the arrival of the vessels, the Navy will be in a position to ensure that the country’s maritime domain remains unattractive to pirates.

Four amphibious ships which brought the four new vessels from China are currently at the Takoradi Anchorage where the new vessels are expected to be offloaded.

The vessels are fitted with the latest vessel monitoring systems to put the Ghana Navy a step ahead of those engaged in pair trawling, illegal fishing, trafficking and illegal oil activities.

The four vessels, which are to be named after selected very poisonous and dangerous snakes in the local languages, will also enable the Navy to protect the country’s multi-billion offshore oil and gas installations.

The vessels, according to military sources, were very swift and designed to meet the country’s maritime security needs, at the same time that the Ghana Air Force was preparing to take delivery of surveillance aircraft next year for effective joint air and sea defence operations.

The sources said the vessels would be officially received by the Minister of Defence at a short ceremony at the Western Naval Command today.

President John Evans Atta Mills is expected to inaugurate and name the vessels at a ceremony before the end of the year.

Maritime experts say the delivery of the vessels is timely, in the face of the emerging oil industry and piracy which is becoming fashionable along the West African coast.
Posted by Crude Oil Daily at 11:29 AM