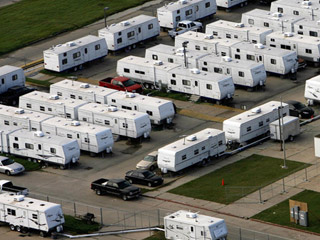 They're pulling in fat paychecks, but now they're also homeless.

In the town of Williston, N.D., America's newest oil boomtown, more than 6,000 job seekers have come from every corner of the country looking for work. Yet, oil companies and other developers haven't been able to build housing units fast enough.

In the past year, only about 2,000 new housing units have been built, leaving many workers out in the cold.

With dozens of job seekers arriving by the day and fewer and fewer spots for them live in, people are taking some desperate measures.

Newer arrivals who can't find vacant hotel rooms or apartments sleep in their cars or in sleeping bags on spare patches of grass along the highway. The luckier ones nab a spot in one of the dozens of dorm-like facilities, known as "man camps," that the oil companies have built to house their workers.

The living conditions are far from ideal, but to some of these workers the lure of doubling or tripling their salaries far outweighs the physical and mental toll it can take.

My street address is the Walmart parking lot

In July, Matt was transferred from a Walmart in Minnesota to Williston's only Walmart -- more than doubling his salary. After arriving in the town he bought an RV to live in and soon realized that the store's parking lot was going to be the closest thing to home he was going to have for some time.

Each day, he buys something from the 24-hour Supercenter so he has an excuse to stay there. At night, Matt (who asked that his last name not be used) and his neighbors break out their lawn chairs, a grill and some beers and tell stories into the wee hours about where they have come from and what they are doing -- or hope to do -- with the money they will make off of this black gold rush.

Double your salary in the middle of nowhere, North Dakota

LaRae and Scott Miles have been living with their two kids and three dogs in an RV parked in a Williston campground since moving from Washington more than a year ago.

"It's crazy to go from having a home and a yard to living in an 8-by-10 trailer with no yard," said their daughter Kimberly, a sophomore in high school whose belongings are in a suitcase stowed at the end of her bed. "It's going to be a great day when we find a house."

Before the move, the Miles' were struggling to make ends meet. Now, Scott is making $20 an hour as a truck driver -- double his previous salary.

"I'm happy we moved out here, but I'm not happy about how we live," said LaRae. "We're looking for something more permanent to rent, but this is about all we can do."

Life in the "man camps"

Even those who have a place to live find the conditions tough. Many of the major oil companies that are cashing in on the oil discovered in the Bakken formation have been renting entire floors of hotels, spare apartments or building housing facilities -- called "lodges" by some and "man camps" by others -- in order to house their workers.

Halliburton, one of the major drilling and hydraulic fracturing companies in the region, even went so far as to have the Olympic Village housing units that were used for the security guards from the Vancouver 2010 Winter Olympics relocated to the town for its workers.

Benjamin Lukes, 31, has been living in Halliburton's "man camp" for almost a year now.

Lukes is bringing in roughly $100,000 a year (including overtime pay), nearly triple the amount he made back in Minnesota when he was manufacturing plastics. But it means being far from his family and living in quarters that he likens to a "prison cell."

The facility is wall-to-wall white, with long empty hallways and flourescent lighting. Lukes' room is about 160 square feet, the walls are bare -- except for a drawing from his daughter -- and there's a metal-framed twin bed.

The $400 a month he pays for rent includes housekeeping and three complimentary meals a day, making it the best deal around, he said. But he will never call it home.

"[My wife and I] talked about trying to find something in the area where I could bring them, he said. One of the local hotels said they would have an apartment suite available in February for $6,700 a month. "[Y]ou can imagine that wasn't a real good option... there's just nowhere to put them."

Lukes hates that he missed the birth of his son this year, but knows he can't support his growing family without this job.

"Each work cycle as I drive away seeing my two-year-old daughter's face in the window, I wonder how much longer I can keep this up," he said. "In the meantime, though, I keep getting promotions, and raises, and bonuses. It's a mixed blessing."

Cindy Marchello, who is 54 and from Logan, Utah, works for a trucking company and is the only woman living in her man camp. She pays $600 a month and has to share a bathroom with a man.

"I miss my family," she said, sitting near the frames full of family photos she keeps on her bureau. "When I leave [after going home to visit], I have to leave in the middle of the night. I can't tell everyone goodbye. And I cry all the way back."

Efforts are being made to build more housing in Williston and other oil boomtowns. Some even see it as an investment opportunity.

Former New England Patriots football player Jarvis Green and his company, First Millenium Construction, are building a 500-person man camp in Watford City, less than 50 miles south of Williston. Green said he expects to make a 200% to 300% return on the multi-million dollar investment, and he said the lodge should be completed by the end of the year.

"Out there they don't have a recession -- you say that word out there and somebody would probably slap you," said Green. "It's the place to be."
Posted by Crude Oil Daily at 11:47 AM