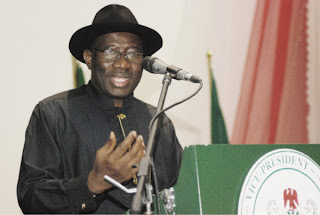 http://www.csmonitor.com/World/Africa/2011/1030/Move-over-Boko-Haram-Nigeria-s-MEND-rebels-set-to-restart-oil-war-in-Niger-Delta
Leaders of Nigeria's MEND rebel group – and other militia commanders in the oil-rich Niger Delta – say they're ready to launch fresh attacks after two years of relative quiet following a 2009 amnesty.

Earlier this month, Nigerian President Goodluck Jonathan was forced to move a large outdoor celebration marking the 51st anniversary of Nigeria's independence from British colonial rule from Eagle Square, a large public space in the capital city of Abuja, to his presidential residence.
Skip to next paragraph

Boko Haram – the Muslim militant group that killed 23 in an Aug. 26 bombing on the United Nations headquarters in Abuja – had threatened the festivities.

But Boko Haram was not the only group to threaten an attack.

The Movement to Emancipate the Niger Delta (MEND) – a militant group from the oil-rich area of Nigeria's predominately Christian South – issued its own threat. It claimed responsibility for a bomb at a similar celebration last year, which killed 12 people, and said it would strike again.

MEND's threat was its most audacious public announcement in years – a sign of its growing frustration over the Nigerian government's decision to shift its attention to the country's mainly Muslim northern half, where Boko Haram operates.

It's also one of the latest signs that MEND and other militant groups that terrorize the Niger Delta region are set to revamp their campaign of attacks after remaining relatively quiet since amnesty was offered to top militant leaders in 2009.

Before the amnesty, in which some militant leaders agreed to put down their weapons in exchange for an unconditional pardon, MEND had been steadily ramping up the intensity and effectiveness of its attacks on oil facilities, causing global oil prices to spike repeatedly.

The amnesty calmed that, but systemic problems in the Delta – extreme poverty, environmental degradation, claims of exploitation by oil companies, and the ever-present threats of crime and violence – still exist.

MEND, while weakened in the wake of the amnesty, is strengthening again, determined to make Mr. Jonathan pay attention to the Delta's woes.

MEND and other militant groups typically speak to the media through spokespeople: Access to leadership is rarely granted.

In recent weeks, I traveled through the slums in and around Port Harcourt to interview high-ranking officials in MEND and the Niger Delta People's Volunteer Force (NDPVF), the two largest and most capable militant groups operating in the Delta.

I also met with a general in the Ice­landers, a smaller group that ruthlessly controls shantytowns along Port Harcourt's waterfront.

What these interviews reveal is a vibrant and active militant movement, simmering with anger and resentment over the government's failure to keep promises.

These groups are primed to fight Boko Haram, a movement they dismiss as irrelevant to Nigeria's future.

These leaders also say that the war they waged against the Nigerian government, which has been dormant in recent years, is about to begin again.

The amnesty brought about a decrease in kidnappings and attacks against foreign workers and oil installations. This year, these attacks are again becoming common.

According to interviews with two MEND generals – one who uses the alias TK and one who calls himself Eybele – this uptick in violence is planned.


Both say that while other groups might operate under the name, the core of MEND has developed a sophisticated organizational structure in recent years and is again capable of kidnappings and complex quick-strike bombings and attacks.

They say dissatisfaction with government efforts to improve the Delta, and frustration over Jonathan's focus on Boko Haram, will lead to an increase in MEND activity.

TK and Eybele say there are four MEND generals. Each general has approximately 400 "boys," or soldiers, under his command, making the full MEND fighting force about 1,600. Both say they were former students and activists who turned to militancy when the Delta's problems were ignored.

Their independent descriptions of MEND's organization corroborate each other.

The generals say they answer to a man called Tomonu. It is unclear if they are referring to MEND's Gen. Godswill Tomunu, who has not been heard from since a BBC interview in 2006.

Meeting in an alleyway

I met with TK in an alley of a waterfront slum. Eybele, the more polished and soft-spoken of the two, met me in the bedroom of one of his fighter's homes in a shantytown farther inland. Both decry the government's lack of progress toward improving infrastructure in the Delta and say that violence was the only way to bring attention to unacceptable living conditions.

"We want to live in an environment with good schools for our young ones, good piped-in water, good infrastructure," TK says. "We're living in shambles."

"The government promises and fails you," he continues. "If there's no revolution, this place will not be a better place."

Eybele stresses that renewed attacks against oil companies would be collateral damage in a war against the government, which he says did not live up to commitments made during amnesty negotiations.

"We survive through armed struggle," Eybele says. "Most of our boys need something meaningful, but they don't have it. The government is celebrating 51 years of independence while we have nothing. What are we celebrating for?"

"If the oil companies and the government can collaborate and give 50,000 jobs to [the] indigenous [people] so we can partake in the sharing of the system, it would go a long way to assist our people," he says.

Later that day, I met with Blessing Dumo, a young commander in the NDPVF, next to a pool in one of Port Harcourt's walled-in expatriate communities. When he approached the table I thought he was just a college student – indeed, he is studying computer science at a university in Port Harcourt. His arguments are grounded in political principles and he speaks with the conviction of an activist.

Mr. Dumo says the number of soldiers in the NDPVF is in the thousands. He shares many of the same complaints as TK and Eybele, but his anger is focused on the amnesty, which he calls a failure.

"We are not criminals and we're not taking amnesty," Dumo says. He joined the NDPVF to fight for indigenous rights, he says. "We accept the peace of the amnesty, but we're not taking the cash. I don't want to be paid, but I want the Niger Delta to get employed."

He reserves particular anger toward Royal Dutch Shell, which was forced to shut down a major pipeline here after it was bombed Oct. 6. Dumo neither confirms nor denies NDPVF's involvement in the attack.

"Shell is messing up the community, polluting the areas," he says. "Shell cannot stay in the Niger Delta. They are not a plus to us. They cause a commotion in our communities."

Militancy bred in the slums

After Ateke Tom, the notorious leader of the Niger Delta Vigilante, accepted amnesty, the group split into smaller factions, according to sources close to the militancy.

One such group is the Icelanders, which controls slums along Port Harcourt's waterfront as well as on the island of Okrika in the Delta.

I met with an Icelanders general named JB in one of the shanties he controls. JB seems to lack the sophistication of the MEND generals or Dumo, but his passion is unmatched.

He throws his hands about as he rants about government inaction. His eyes are wild with rage as he compares the Niger Delta community to the Israelites, each deserving of a Promised Land.

His soldiers stand outside and watch me closely through an empty window frame.

"The Okrika man is silent. He is watching what the government will do," JB says. "If need be, we will come out again in our full force in arms."

JB is joined by his second in command, Lucky Lagogo, and a bodyguard named George. When I bring up Jonathan's amnesty offer, all three men become agitated.

"The amnesty paid a few people; a few people took that money. I want Goodluck [Jonathan] to pay everyone in the Niger Delta!" George shouts.

"The government [doesn't] honor gentlemen. They honor those who are radical. By paying the ones who are radical, you pay the gentle ones to become radical," says JB. "Let [amnesty payments] go around to all youths in Niger Delta. When it goes down to the youth, there will be peace."

JB leans over and puts his finger in my chest.

"You are a live witness," he says. "You came to this community today. You can see people struggling. They are supposed to be empowered by the government."

All of the militants I spoke with are dismissive of Boko Haram and the threat the Islamist group poses to the country.

The MEND generals say they sympathize with the group's grievances, but that they do not approve of their tactics, particularly the random killing of Christians and the burning of churches.

'The answer is Western education'

When I ask TK what would happen if Boko Haram entered the Delta, he waves the question away.

"Boko Haram should not come here," he says without elaborating.

Dumo is more animated in his criticism of the group. He says its members are looking for a payout similar to the one the Delta rebels were offered during amnesty.

JB, for his part, offers the Icelanders' services to fight Boko Haram. He says the Niger Delta brings oil wealth to the country while the north produces nothing.

"The problem of Boko Haram is not a problem," JB says. "We'll tell the nation to observe and declare a 48-hour war between Boko Haram and the Niger Delta youth."

"Let them see what happens. If it comes to that, we will be very much grateful," he adds. "We must shame them to the general public. Boko Haram has nothing to be proud of."
Posted by Crude Oil Daily at 11:36 AM