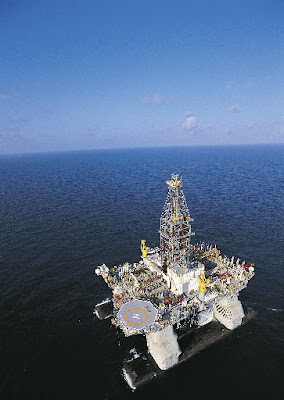 (Bloomberg) -- When the Leiv Eiriksson, a rig built to hunt for oil beneath 10,000 feet of water in the world’s roughest seas, finishes drilling a well off Greenland’s west coast next month, it will sail for its next job -- a prospect 9,000 miles away, south of the Falkland Islands.

The monthlong voyage from top to bottom of the Atlantic Ocean, at a cost of about $500,000 a day, exemplifies how the world’s drillers have never spent so much searching for oil and gas in so many places, spurred by crude prices above $100 a barrel and depleting reserves at existing fields.

After holding back in the aftermath of the financial crisis, Exxon Mobil Corp., BP Plc, Royal Dutch Shell Plc and other producers will increase exploration spending by the most since 2007 this year to a record $70 billion, said Wood Mackenzie Consultants Ltd. That’s bringing rigs to countries with no history of oil and gas production, from French Guiana in South America to Kenya in east Africa.

“The race for exploration has become hotter than ever,” said Michael O’Dwyer, managing director for oil and gas at Morgan Stanley & Co. in London. “The biggest change I’ve seen in the activities of oil companies over the last 24 months is the focus on exploration.”

About three-quarters of exploration money for conventional oil and gas is spent offshore, where 284 wells will be drilled next year, 30 percent more than in 2011, targeting more than 100 billion barrels of potential reserves, according to Morgan Stanley.

BP and Total SA are increasing exploration budgets after the world’s largest oil companies were beaten to the biggest discoveries by smaller competitors in recent years, such as Tullow Oil Plc’s Jubilee field in Ghana, which is now pumping 120,000 barrels a day.

“Majors have overlooked a number of the biggest basins in the world,” BP Chief Executive Officer Bob Dudley said at a press conference yesterday.

U.S. independent Anadarko Petroleum Corp. has found fields off Mozambique in east Africa that hold more gas than the U.K.’s total remaining reserves. Rockhopper Exploration Plc’s Sea Lion discovery is the Falkland Islands’ first commercial find and may contain as much as 1.4 billion barrels of oil.

“We’re seeing some courageous exploration activity at the moment, particularly with the medium-sized companies such as in Greenland and east and west Africa,” said John Martin, managing director for global energy at Standard Chartered Plc in London.

The so-called supermajors have responded in two ways. First, by becoming partners with smaller companies and secondly, by drilling more exploration wells themselves.

At BP, the experience of drilling a well in the Gulf of Mexico that exploded and caused the U.S.’s worst oil spill hasn’t deterred it from exploration. The company plans to double spending on exploration from $2.7 billion in 2010. The company plans drilling in waters off Australia, China and the U.K., and will increase its exploration wells to as many as 25 a year by 2013 from six wells drilled this year.

“It’s very hard to grow and make a profit with an oil and gas company unless you are good at, and are investing in, exploration,” Helge Lund, chief executive officer of Statoil ASA, Norway’s largest oil company, said in an interview. “It seems that compared to what we saw in the 90s, oil and gas companies are exploring much more now.”

“As long as oil prices stay above $80, no one’s going to slow their exploration programs,” said Jason Gammel, an analyst at Macquarie Capital Europe Ltd. in London. “Exploration is very high risk, but the highest rates of return on capital tend to be from fields you discover yourself. Unlocking new frontiers can bear fruit.”

The 11 percent drop in prices in the past six months isn’t likely to deter exploration, Wood Mackenzie analyst Andrew Latham said. Brent oil, a benchmark price for two-thirds of the world’s crude, is still more than 30 percent higher than its five-year average. Futures contracts show prices above $100 for the next two years.

Brent crude futures for delivery in December traded at $110.79 a barrel in London today. The contract for delivery at the end of next year was at $103.70.

“The recent softening in oil prices doesn’t change exploration planning,” Latham said. “Most of the industry is planning on prices ranging from $70 to $80.”

Wood Mackenzie’s figures for exploration spending don’t include investment in so-called unconventional oil and gas, which is extracted from oil sands or by grinding underground rocks.

Still, many wells will find nothing more than sand or water. Edinburgh-based Cairn Energy Plc’s $1 billion drilling campaign in the Arctic waters off Greenland has yet to make a significant discovery. While the success rate for exploration wells worldwide is about 48 percent this year, typically only one in four exploration wells will find oil or gas, according to Morgan Stanley.

That’s a factor that may also play to the balance sheet strength of the largest oil companies as worsening financial conditions make funding harder to find for smaller explorers. An index of oil and gas companies on London’s junior AIM market --a leading source of equity finance for smaller drillers -- has dropped 39 percent this year.

“The big question is whether financial market turmoil will put pressure on spending,” said Lucy Haskins, an equity analyst at Barclays Plc in London. “Most of the big-cap companies are very keen not to get into a stop-go investment cycle that has dogged their production in past, but some of smaller players may be a more cautious short term.”

--With assistance from Tara Patel in Paris and Maryam Nemazee and Olivia Sterns in London. Editors: Will Kennedy, Stephen Cunningham

To contact the reporter on this story: Brian Swint in London at bswint@bloomberg.net

To contact the editor responsible for this story: Will Kennedy at wkennedy3@bloomberg.net
Posted by Crude Oil Daily at 12:23 PM