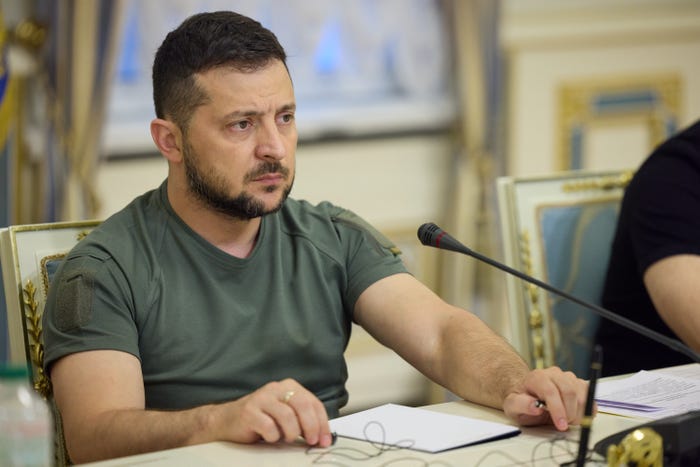 Zelenskyy signed the law on Thursday after Ukraine's parliament passed it earlier in December, The New York Times reported. Lawmakers have touted the bill as an effort to bring Ukraine's media laws closer to European Union standards as the country makes a bid to join the 27-member bloc. They have also argued that it will help counter Russian propaganda as Russia's invasion of Ukraine nears its one-year anniversary.

But organizations representing journalists say the law will erode press freedoms in Ukraine. Under the law, Ukraine's media regulator could block websites that are not registered with the government as news organizations, The Kyiv Independent reported on Friday.

The law is at odds with freedoms given to the press in other parts of Europe, the European Federation of Journalists said in a statement on Friday, according to the Times.

Ukrainian lawmakers have been considering a new law regulating the media since 2019, when Zelenskyy directed parliament to draft it. The version that Zelenskyy signed on Thursday is not as sweeping as a previous draft, which the Federation called "worthy of the worst authoritarian regimes."

The legislation also drew criticism from the legal department of the Ukrainian parliament, which claimed that lawmakers did not do enough to investigate whether the bill would lead to government censorship.

Since Russia's invasion in February 2022, Ukraine has introduced changes to how the media operates. In March, for instance, Zelenskyy signed off on combining the country's national television channels into a single platform, Reuters reported at the time.

Zelenskyy himself has expressed frustration with the media at times. In August, he criticized Ukrainian officials for telling the press about Ukraine's military strategy.