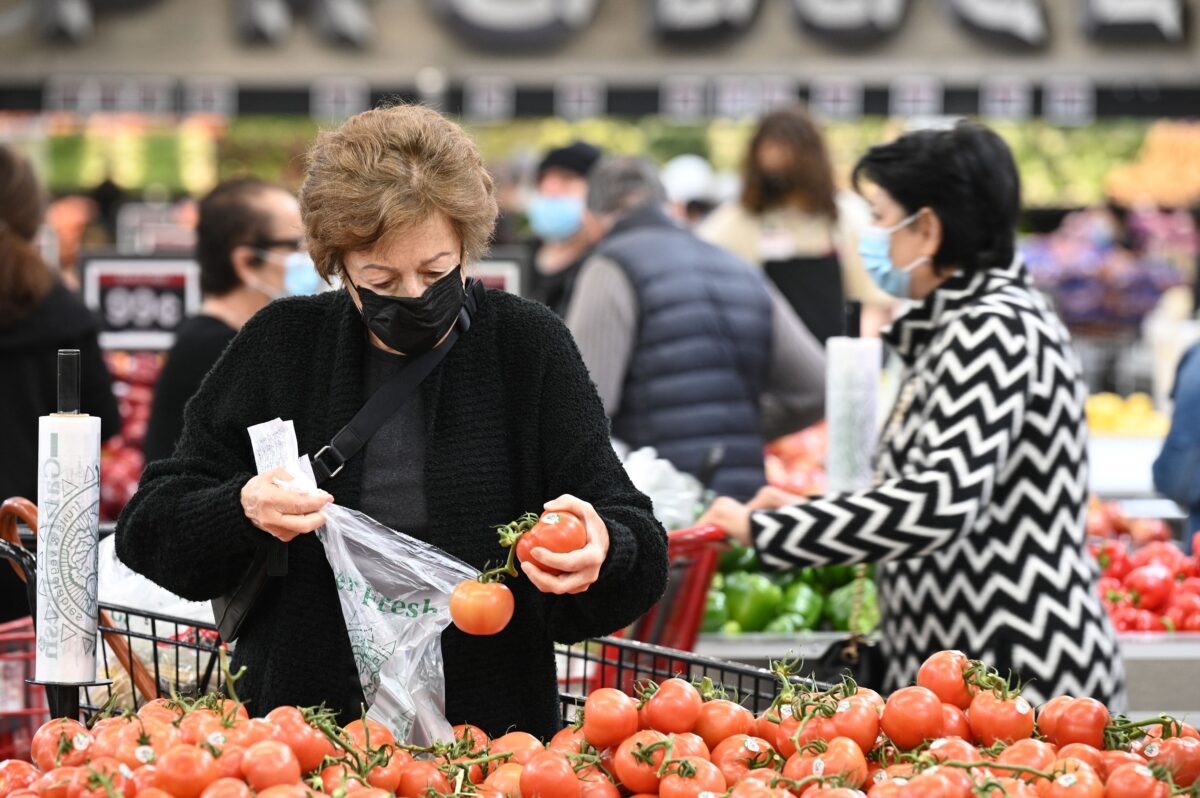 People shop for groceries at a supermarket in Glendale, Calif., on Jan. 12, 2022. (Robyn Beck/AFP via Getty Images)

The vast majority of economists at 23 large financial institutions surveyed by The Wall Street Journal predict that the United States will fall into the grips of a recession in 2023 and millions of Americans will lose their jobs.

More than two-thirds of the nearly two dozen institutions—which include trading firms and investment banks that do business directly with the Federal Reserve—expect the U.S. economy to contract in 2023, according to the report.

Two of the 23 institutions expect the recession to come later—in 2024—while the following five believe the United States will manage to avoid a downturn altogether: Credit Suisse, Goldman Sachs, HSBC, JPMorgan Chase, and Morgan Stanley.

The institutions that predict a coming recession expect consumer spending to weaken as Americans deplete their savings and an aggressive Fed drives up borrowing costs, and as banks’ lending standards get tighter.

Soaring U.S. inflation, which in June 2022 hit a recent peak of 9 percent in annual terms, as measured by the Consumer Price Index (CPI), has forced the Fed to raise rates at its fastest pace since the 1980s in a desperate bid to relieve price pressures.

The aggressive rate hikes have so far had only a limited impact, with November’s CPI data showing inflation running at 7.1 percent.

An alternative measure of inflation that uses the same methodology the U.S. government used to measure CPI in the 1980s puts November’s inflation figure at a much higher 15.23 percent.

Even though inflation has eased somewhat from its June peak, it’s far from enough for the Fed to hit the brakes on interest rates, which were brought up quickly from near zero in March 2022 to the current range of between 4.24–4.5 percent.

Frustrated by how sticky high inflation has remained despite the rate hikes, Fed officials have pledged to keep raising rates and keep them high until inflation recedes to around the Fed’s 2 percent target, as measured by the core Personal Consumption Expenditures (PCE) price index.

Core PCE, which excludes the volatile categories of food and energy, in November came in at 4.7 percent, more than twice the Fed’s target.

In their most recent summary of economic projections, Fed officials said they expect the terminal Fed Funds rate—meaning the highest level before it hits a ceiling and later falls—to come in at 5.1 percent.

Rates that high will push unemployment up from the current 3.7 percent to 4.6 percent in 2023 and stay at that level in 2024, according to the Fed.

Most of the economists surveyed by the Wall Street Journal think unemployment will get even worse and peak at over 5 percent.

An unemployment rate that high would mean several million Americans losing their jobs.

Meanwhile, a review of 2023 market outlook reports from ten major investment banks by SMB Law Group shows that the majority are leaning pessimistic, with one of them (Barclays) predicting that this year “will be a long, hard slog.”

Goldman Sachs, which SMB pegged as “leaning optimistic” with a sentiment score of 6, predicts that the United States will “narrowly avoid recession.”

JPMorgan, seen as “moderately optimistic” with 7 points on SMB’s sentiment scale, is calling for 2023 to be a “bad year for the economy” but a “better year for markets,” with a “low” risk of a “deep, housing-led recession of the type experienced in 2008,” when a sub-prime mortgage meltdown spiraled into a broader financial crisis.

‘The Worst Is Yet to Come’

Prior to 2020, inflation was seen as all but tamed. But after COVID-19 hit, as the government and the Federal Reserve flooded locked-down businesses and households with trillions of dollars in stimulus and support, the era of low inflation ground to a halt.

While the money helped businesses keep workers on payrolls and bolstered consumer spending, it also led to an inflationary jump in demand as supply chains that were crippled by pandemic restrictions couldn’t keep up.

Idled factories were unable to ratchet up production fast enough to meet the jump in demand, an inflationary dynamic made worse by labor shortages as more people who were close to retirement left the workforce permanently amid the pandemic and as generous stimulus checks kept others from seeking employment.

Inflation in the United States, as measured by the Consumer Price Index (CPI), soared from a pandemic-era low of 0.24 percent in May 2020 to a recent peak of 9 percent in June 2022.

In the face of soaring inflation, central banks across the world have hiked interest rates in a bid to cool demand and relieve price pressures, raising the risk of a recession.

The International Monetary Fund (IMF) said in its latest biannual global economic outlook, released in October, that it expected inflation to peak in late 2022 but warned that it would “remain elevated for longer than previously expected.”

The IMF said in its report that, despite projections for lower inflation overall in 2023, it expects more economic pain.

“More than a third of the global economy will contract this year or next, while the three largest economies—the United States, the European Union, and China—will continue to stall,” the IMF said in the report.

“In short, the worst is yet to come, and for many people 2023 will feel like a recession.”