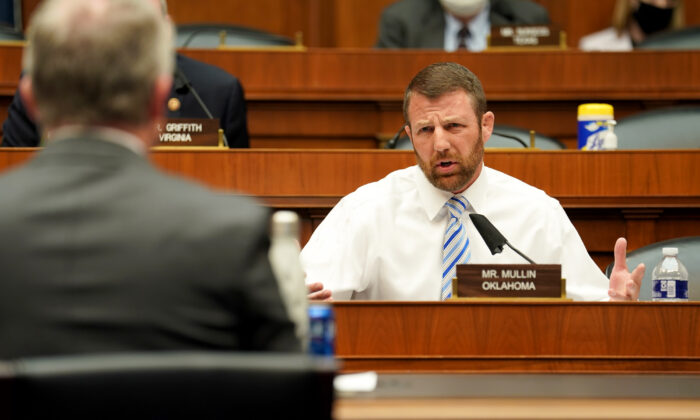 Rep. Markwayne Mullin (R-Okla.) asks questions to Dr. Richard Bright, former director of the Biomedical Advanced Research and Development Authority, during a House Energy and Commerce Subcommittee on Health hearing to discuss protecting scientific integrity in response to the coronavirus outbreak, in Washington on May 14, 2020. (Greg Nash-Pool/Getty Images)

Newly sworn-in Sen. Markwayne Mullin (R-Okla.) has been in the U.S. Senate for three weeks and he’s moving forward with his first legislative package, which is focused on expanding U.S. energy production and cross-border energy permits.

On Tuesday, Mullin introduced three new Senate bills focused on the energy sector. The first bill he introduced seeks to clarify that a state has the sole authority to regulate hydraulic fracturing—also known as fracking—on federal land within the boundaries of the state. Mullin’s second bill would give states further control over energy production on federal lands available to those states. His third bill would reform the process for permitting the construction and operation of cross-border oil and natural gas lines, with a goal to make the process more uniform and transparent.

While he expressed his view that consumers should be able to choose the products and industries that succeed, Mullin said “D.C. elites, bureaucrats” have been controlling those decisions. “So if they’re going to play this game, and it looks like they’re going to, then we need to take it out of their hands.”

President Joe Biden repeatedly withdrew oil from the Strategic Petroleum Reserve (SPR) throughout 2022 as gas prices rose throughout the year.

Mullin said the Biden administration timed withdrawals from the SPR as a ploy to lower gas prices before the 2022 midterms.

“They used the Strategic Petroleum Reserve, SPR, which is supposed to be for national security emergency purposes, for a political ploy,” Mullin said.

Mullin noted Rep. Cathy McMorris Rodgers (R-Wash.) recently introduced a bill that would restrict the executive branch from making withdrawals from the SPR without developing a plan to boost domestic oil and gas production to match the amount being taken out of the SPR. The bill stipulates emergency situations where the executive branch may make withdrawals from the SPR without having to develop plans to refill the reserve.

“Underneath the Trump administration, we became a net [oil] exporter. We were exporting nearly a million barrels per day underneath Trump. Today, we’re importing that same amount,” Mullin said. “So we don’t have to tap our strategic oil or strategic petroleum reserves.”

The Biden administration has indicated the president would veto McMorris Rodgers’ bill if it does pass in the House and the Senate.

In a Monday press conference, Energy Secretary Jennifer Granholm said the bill “would not offer any tangible benefits to the American people” and would instead “interfere with our ability to be responsive to release oil during an international emergency, helping Putin’s war aims.”

During the press conference alongside Granholm, White House Press Secretary Karine Jean-Pierre repeatedly described McMorris Rodgers’ bill as a Republican plan to “raise” prices on Americans at the pump.

As one of his bills would reform how cross-border oil and natural gas lines are built, Mullin spoke out on the Biden administration’s decision to cancel the Keystone XL pipeline project.

The Keystone XL line was a proposed new route for the existing Keystone Pipeline, which carries gas from Canada to the United States. Former President Donald Trump had permitted the Keystone XL pipeline construction to proceed, but Biden revoked the pipeline permits through an executive order on his first day in office.

Mullin said the current authority that the president has to approve cross-border energy pipelines can create complications for the companies working to build the pipelines.

“If you’re an investor and you’re looking at the Keystone pipeline, and say a next administration comes in—say Trump comes back in and he approves the Keystone pipeline—well, you’re going to get four years for it to be approved. So you’re going to invest billions of dollars knowing that the next president that comes in can reject that permit just like Biden did? And all of sudden you have all this material that was already on the ground and in the ground … and then some of it already dug, that you’re just going to stop the project?” Mullin said.

Mullin said if the United States wants to attract energy investors who could create thousands of jobs with new energy construction projects, it will need to change the permitting process so that years of work to gather permits and prepare for construction aren’t canceled as they were under Biden’s order.