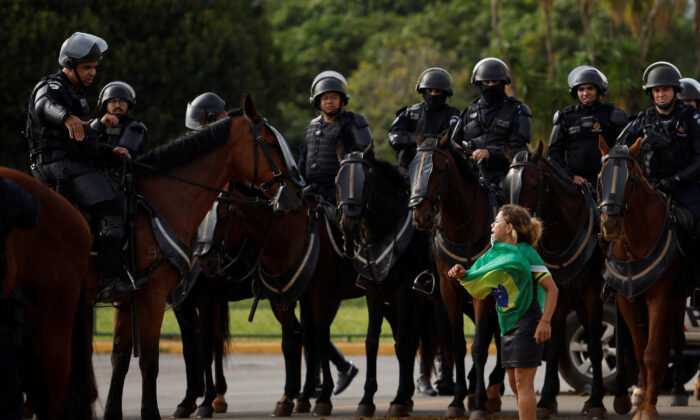 A demonstrator reacts next to members of security forces as supporters of Brazil's former President Jair Bolsonaro leave a camp outside the Army Headquarters, in Brasilia, Brazil, on Jan. 9, 2023. (Amanda Perobelli/Reuters)

Police in Brazil surrounded and began clearing a camp of protesters who back former President Jair Bolsonaro in the capital on Jan. 9. More than a thousand arrests were reported by local media outlets as the country’s Supreme Court ordered the immediate dismantling of the pro-Bolsonaro camps after protesters stormed government buildings over the weekend.

At least 1,200 people have been arrested at a makeshift camp outside the army headquarters in Brasília, and authorities are using dozens of buses to transport the detainees to police headquarters, according to The Brazilian Report.

Members of the Brazilian military were seen dismantling tents set up by pro-Bolsonaro supporters—as well as the demonstrators themselves—at the encampment ahead of a noon local time deadline set by authorities for the protesters to leave.

The governor of Brasília told Reuters that all security forces had been activated to confront the protesters.

Ibaneis Rocha, governor of the Federal District, wrote on Twitter that he had fired the district security chief and “put all the security forces on the streets, with the determination to arrest and punish those responsible.”

Police retook the public buildings after roughly three hours and dispersed the crowd with tear gas.

In the wake of the incident, Brazil’s Supreme Court ordered the immediate dismantling of pro-Bolsonaro encampments that sprang up since the Oct. 30, 2022, runoff election in which Bolsonaro narrowly lost to Luiz Inácio Lula da Silva, a socialist.

Lula was sworn in as the country’s president on Jan. 1 and held a cabinet meeting on Jan. 9 inside the presidential palace that a day earlier was overrun with protesters.

Brazil’s Supreme Court ordered the “total eviction and dissolution” of pro-Bolsonaro camps set up in front of the Brazilian army headquarters in the capital and in front of army garrisons in major cities across the country.

The high court also ordered that protesters be arrested.

‘Indignation And a Sense of Injustice’

While Bolsonaro hasn’t conceded defeat to Lula, the former president in November authorized his chief of staff to begin a transition and has said he would abide by Brazil’s constitution.

Mass protests have gripped Brazil since the runoff, with Bolsonaro’s supporters casting doubt on the authenticity of the election results and demanding that the military intervene.

While Bolsonaro hasn’t directly claimed fraud in the election, he said in November that the protests were the fruit of “indignation and a sense of injustice.”

Bolsonaro condemned the Jan. 8 breaches of government buildings, saying in a series of posts on Twitter that peaceful demonstrations that take place within the bounds of the law “are part of democracy” but that “invasions of public buildings” are a step too far.

Lula, who was on a trip to Brazil’s most populous state, São Paulo, when the government buildings were breached, declared a “federal security intervention” until the end of January.

“All these people who did this will be found, and they will be punished,” he said at a press conference.

Lula blamed Bolsonaro for the incident, saying in a series of posts on Twitter that Bolsonaro gave several speeches “encouraging this” and that the breaches are “also his responsibility and the parties that supported him.”

Bolsonaro pushed back on Lula’s claim.

“I repudiate the accusations, without evidence, attributed to me by the current head of the executive of Brazil,” Bolsonaro said on Twitter.

“Throughout my mandate, I have always been within the four lines of the Constitution, respecting and defending the laws, democracy, transparency, and our sacred freedom.”

Another part of the order issued by Brazil’s Supreme Court was to hand a 90-day suspension to Rocha on Jan. 8, based on claims that local law enforcement under his command failed to respond to threats from the pro-Bolsonaro protesters.

In a press conference late on Jan. 8, Brazil’s minister of institutional relations said the buildings that were breached would be inspected for evidence, including fingerprints and images, to hold people to account.

Justice Minister Flávio Dino said the acts amounted to terrorism and coup-mongering and that authorities have begun tracking those who paid for the buses that transported protesters to the capital.

“They will not succeed in destroying Brazilian democracy. We need to say that fully, with all firmness and conviction,” Dino said. “We will not accept the path of criminality to carry out political fights in Brazil. A criminal is treated like a criminal.”

In a press conference from São Paulo state, Lula read a freshly signed decree for the federal government to assume control of security in the federal district. He said the protesters, who he labeled as “fascist fanatics,” as well as those who financed their activities, must be punished.

Lula also said at the press conference that there was “incompetence or bad faith” on the part of the police, and he promised that some of them would also face punishment.

The Associated Press contributed to this report.