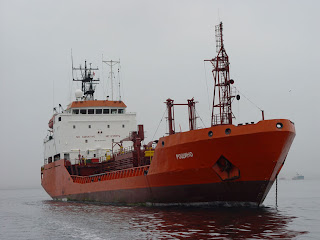 YENAGOA, Nigeria(Reuters) - Nigerian authorities said on Monday they had arrested two oil thieves and seized a boat used by them to sell illegally refined fuel along a river in the oil-rich Niger Delta.

Nigeria is Africa's largest crude oil exporter but its production capacity has been slashed by thieves drilling into pipelines passing through winding creeks and waterways in the vast delta.

The underground industry is thought to be worth hundreds of millions of dollars a year.

"In an ongoing effort to dislodge illegal refinery operators and crude oil thieves in the Niger Delta region, operators of the Joint Task Force impounded another vessel engaged in the lifting of illegally refined petroleum products," local security forces said in a statement.

It added that the boat was "arrested with a crew of two" and found with "5,000 tons of illegally refined diesel, four ... storage tanks with capacity of 7500 litres each, three drums containing 250 litres of illegal diesel each."

Seven Nigerians and two Ghanaians were each sentenced to 90 years in prison for oil theft and illegal refining this month. (Reporting by Tife Owolabi; Writing by Tim Cocks; Editing by Roger Atwood)
Posted by Crude Oil Daily at 2:06 PM