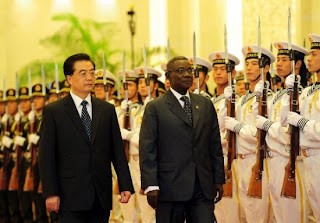 The President of Ghana, John Evans Atta Mills, intends to pull Ghana out of the International Monetary Fund in a final bid to end moves by the Christine Largarde-led funding agency to suffocate the US$3 billion loan the NDC government wants from the China Development Bank (CDB).

News of the president’s unwavering stance on the US$3 billion Chinese loan made it into the newsroom of The Globe newspaper as a powerful delegation of lawmakers from the People’s Republic of China flew into Ghana last week for an official visit, that also saw them visit Ghana’s Parliament – the arm of government that approved the controversial 3 billion dollar loan.

With just a little over a year left of its four-year mandate, and following what appears to be deep-seated challenges that have crippled the roundly marketed STX housing project, analysts say the Mills government badly needs huge foreign capital injection if it is to honour a string of mouth-watering campaign promises on whose back it rode to political power in January 2009.

Financial and Development Experts have argued that the 3 billion dollar loan – to which the IMF is strongly opposed – has the potential to give a lifeline to a government that came to power promising massive investment in infrastructure, but has -- in the words of opposition leader Nana Addo Dankwa Akufo-Addo – so far delivered “little. ”

In a clear case of defiance of the IMF’s directives, President Mills is said to have given firm instructions to the Minister of Finance to, as our government source put it, “ensure everything lawfully, politically and diplomatically possible is done” to save the mega loan agreement between Ghana and the China Development Bank. “And, by this I mean, even if it involves walking out of the IMF,” the source added.

“We have already suffered collapse of the STX Housing project. Many in this government believe therefore that a second term for the President is inextricably linked to the 3 billion dollar loan. That is why he is determined to see it materialise and not even the IMF can stand in his way,” said the source, who works in the office of the President.

The IMF supports Ghana largely to fasten its macro-economic indicators to achieve the stability needed for business planning and growth. Under President Mills’ predecessor’s administration, Ghana did wean itself off IMF support in line with an announcement made by President John Kufuor in September 2005 during a meeting with Dr Abbas Mirakhor, then Executive Director for Ghana at the IMF.

At that meeting, Kufuor said the bold structural reforms within the first five years of his administration had brought the country’s economy to a point where “the nation must assume full responsibility for its own policies. ”

He also explained that government’s decision did not mean the country was severing its relationship with the Fund. He explained that Ghana was to remain a member and a shareholder as well as maintain policy dialogue with the IMF, except that the structure of the relationship would change.

But, after taking over as President in January 2009, Professor Mills, citing a “mismanaged economy” and an “empty” national kitty, turned to the IMF and the World Bank for support, despite opposition criticisms.

Three years on, the President appears to have had enough of the strings that have repeatedly been attached to the IMF’s supports and is, according to our source, “now ready to tell the managers of the fund that enough is enough. ”

It follows IMF’s resolute stance at a recent meeting with Ghanaian officials that it will not allow Ghana to contract huge loans that violate its rules and guidelines so long as the nation continues to receive the fund’s support under the current Extended Credit Facility agreed with the Ministry of Finance in May 2011.
Posted by Crude Oil Daily at 11:52 AM