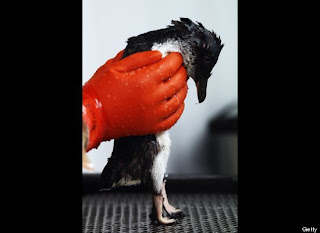 WELLINGTON, New Zealand -- Forty-nine penguins rescued from an oil spill off New Zealand have been freed after being cleaned and nursed back to health by wildlife officials.

The birds released Tuesday are among 343 little blue penguins that have been cleaned of oil since a cargo ship ran aground on a reef near Tauranga on Oct. 5 and spilled some 400 tons of fuel oil.

The penguins were nursed to health at a wildlife facility manned by specialists from New Zealand, Australia and the United States. They were fitted with microchips so they can be monitored after their release.

Wildlife Response Manager Kerri Morgan says it's important wild penguins do not remain in captivity for too long because they can develop injuries and illnesses.
Posted by Crude Oil Daily at 9:38 PM