Ghana will be short-changed with $3b Chinese loan – NPP 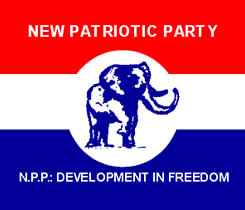 The Minority New Patriotic Party (NPP) said their abstinence from the $3-billion Master Agreement loan, was without malice but to caution government that the nation would be short-changed if government went ahead with the agreement.

The Minority said the agreement had two major illegalities, which made Parliament infringing the provisions of the Petroleum Revenue Management Act 2011 and the Government going against International Monetary Fund’s (IMF) condition that put a ceiling to Ghana’s borrowing not exceed $800 million.

Addressing a press conference at the NPP Headquarters in Accra on Tuesday, the Minority said the NPP was not against the projects to be undertaken with the loan.

“Unquestionably the projects to be covered by the loan are worthwhile for the country,” it said and added that various governments during the Forth Republic including the Kufuor Administration had indicated their desire to embark on these projects in one form or the other through annual budget proposals, manifestos, Cabinet memos and feasibility studies.

The Minority argued that the agreement contravened section 18(7) of the Petroleum Revenue Management Act 2011 (Act 815).

Minority Spokesperson on Finance Dr Osei Akoto quoted the clause: “The annual budget Funding Amount may be used as collateral for debts and other liabilities of government for a period of not more than ten years after the commencement of this Act.”

He said, “Another source of concern for the Minority is the country’s current agreement with the IMF and the World Bank which precludes the country from borrowing more than $800 million non-concessional loan”.

The Chinese loan, he said, “it is a violation of the IMF conditionality, which the National Democratic Congress (NDC) government has agreed to be imposed on us,” and questioned whether the economic management was not aware of this.

Dr Akoto noted that government did not made the loan document available even though the presiding Speaker of Parliament, Mr Doe Adjaho, First Deputy Speaker, saw the wisdom in the stand of the Minority and ruled that the agreement be made available.

He indicated that the first schedule of the Master Facility Agreement (MFA) stated that: “There is a requirement that the government of Ghana shows evidence that the Parliament of the Republic of Ghana approved and authorize the borrower’s entry into the finance document.”

Dr Akoto said a proper totaling of the cost of the projects to be financed by the loan was $3.25 billion, but government was expected to provide 15 percent counterpart funding, which translated to $450 million making the total resource available to $3.45 billion.

“In the event there is going to be excess funding of $200 million which is not accounted for anywhere, the loan document does not mention it, the Cabinet memo does not mention it and the Majority side of the Finance Committee did not address itself to it in its haste to do the bidding of the executive,” he said.

He questioned what would the $200 million be used for or if it would be used as a hidden booty.

According to him, in less than three years of President Atta Mills’ rule, Ghana’s debt had increased to $15.9 billion, adding that total approved loans was a little over $10 billion out a total of $18 billion Ghana’s debt.

Dr Akoto indicated that the commitment fee of one percent was $30 million in the loan agreement brought before Parliament, which was on the undrawn balance (the balance of the loan that remains in the account of the Chinese Bank).

“The diligent objection of the NPP led to the Speaker to rule for the amendment from a flat one percent every year, which would have amount to $375 million to $1 percent on the undrawn balance thus saving the country millions of dollars,” he said.

According to him, the Chinese requested additionally that Ghana committed to sell them oil to offset the loan and required the Ghana National Petroleum Company (GNPC) to commit to the sale of the oil to the Chinese Off-Takers.

He accused the NDC government for not doing due diligence in terms of how much money was needed to implement the identified projects, adding “no proper feasibility has been conducted and that is why government cannot provide any reasonable estimates.”

He noted that the Coastal Fishing Habour and Landing Sites Project according to government required between $15 million and $250 million creating a gap of $100 million.

The Minority also cited government for double payment of contracts arguing that the loan agreement covered the Accra Metropolitan ICT Enhanced Traffic Management Project aspects of the Nsawam road, the Dodowa road and the La Beach road were provided for in the loan agreement.

He said the Finance and Economic Planning Minister Dr Kwabena Duffuor raised bonds and contractors on these same roads had been paid some monies from the amount raised.

“The Minister ought to have come to Parliament for approval to raise the bonds,” adding that the Minister must brief Parliament about the current state of indebtedness to the contractors now that he sought to use part of the Chinese loan to cover the same programmed road.

He noted that if this was not done, Ghanaians would be tempted to conclude that double payment could be effected for same work.

“The $3 billion Chinese loan fails in these critical assessments and that is why the Minority did not vote for the loan and we insist in its current form, the nation is going to be short-changed” he said.

“If government remains stiff-necked and goes ahead to effect payments to whoever knowing that the nation cannot access the money now then we will be right to suspect fraud and corruption and will not hesitate to probe this when we assume the reign of government.”