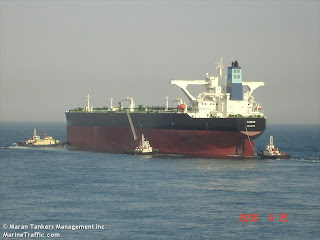 Beleaguered General Maritime has reported a net loss of $ 55.1 mill for 3Q11.

This excluded certain estimated non-cash items and compares to a net loss of $24.9 mill for the prior year period.

Non-cash items for quarter included a $10.7 mill impairment relating to the ‘Genmar Revenge’ which was classified as ‘held-for-sale’ in August 2011, a $1.2 mill loss relating to the disposal of vessel equipment as well as a $29.7 mill mark-to-market unrealised gain on the warrants issued in connection with the Oaktree refinancing.

Net voyage revenue decreased about 34.1% to $37.9 mill in 3Q11, compared to $57.6 mill for 3Q10. These were primarily due to decreases in estimated timecharter and spot TCE rates for the period, compared to the prior year period.

Adjusted EBITDA for 3Q11 decreased about 91.1% to $2.1 mill, compared to $24.1 mill for 3Q10.
Daily direct vessel expenses increased approximately 0.8% from $8,486 per day to $8,556 per day. This estimated increase reflects higher crew costs for the company's Suezmax and Aframax vessels during the period.

Perhaps of more significance, for the nine months of this year, excluding a $44.3 mill mark-to-market unrealised gain on the warrants issued in connection with the Oaktree refinancing, the $10.7 mill impairment relating to the ‘Genmar Revenge’ as mentioned above, a $6.1 mill loss on the disposal of vessel equipment and a $1.8 mill impairment of goodwill, GenMar reported a net loss of $118.4 mill.

By comparison, the net loss for the first nine months of 2010, excluding $1.3 mill non-cash loss for other expenses and loss on disposal of vessel equipment, was $48.1 mill.

As of 2nd November, 2011, GenMar’s fleet consisted of seven VLCCs, 12 Suezmaxes, eight Aframaxes, two Panamaxes and one Handymax. In addition, there were a further three Handymaxes chartered-in on a bareboat basis.

GenMar had previously announced that it was reviewing its financing options and considering various alternatives with respect to the restructuring of its capital structure.
Therefore, somewhat significantly the company did not hold a conference call to discuss the company's results, which was planned for 3rd November.

The company said that it “was not in any way providing any comments, or updating its prior disclosures regarding these matters in this earnings release.”

http://www.tankeroperator.com/news/todisplaynews.asp?NewsID=3083
Posted by Crude Oil Daily at 10:21 AM