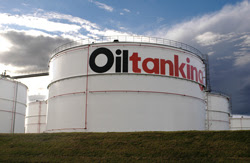 Oiltanking will add 1 million barrels of oil storage capacity at its Houston facility, part of an $80-$85 million (€59-€62 million) expansion.

And Kinder Morgan revealed plans to build a $400 million oil storage terminal on the Houston Ship Channel, including 52 storage tanks with total capacity of 6.6 million barrels, as part of a joint venture with TransMontaigne Partners.

‘In anticipation of these new crude supplies being delivered to the Houston market, we are expanding and strengthening the premier crude oil distribution system in the Houston Ship Channel,’ Conner says.

The project, slated to be completed in early 2013, includes construction of 16 miles of new pipe and reversal of some existing pipe, according to the company. The additions expand Oiltanking's active Houston storage capacity to 18.8 million barrels.

The Battleground Oil Speciality Terminal Company, the joint venture between Kinder Morgan and TransMontaigne, will construct a terminal to handle low-grade oil and residual fuel used by ship engines and industrial plants.
Posted by Crude Oil Daily at 3:49 PM