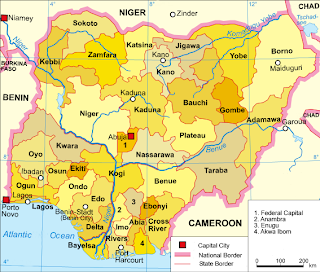 The Minister of state for Finance, Yerima Ngama said in Abuja that the fall of Muammar Gaddafi's government in Libya may affect Nigeria's oil production quota and the 2012 budget.

He also stated that Ghana’s entry into the comity of petroleum producing countries could impact negatively on the nation's oil production quota.


Ngama gave this indication while defending the 2012 Medium Term Expenditure Framework (MTEF) before the House of Representatives Committee on Appropriation in Abuja.


The News Agency of Nigeria (NAN) reports that the Committee had on Friday, October 28, said that unless the Minister of Finance, Mrs. Ngozi Okonjo-Iweala appeared before it to defend the MTFF, it would not receive the 2012 Appropriation bill from President Goodluck Jonathan.
Ngama said that the 2012 budget was initially premised on $75 per barrel, but was pruned down to $70 per barrel, while the exchange rate was fixed at $1 to N153.

He said that the exchange rate was arrived at through the combination of extrogenous factors and information put together by relevant fiscal authorities.

The minister said that the Central Bank of Nigeria, as the nation’s apex bank, allied with the projection of exports, imports and global financial trends.

‘’External forces that can influence the exchange rate are beyond the control of the CBN, it is better to allow fiscal authorities to make their assumption because of the information at their disposal. ”
On the 2012 fiscal outlay, he stated that N794 billion had been set aside to service domestic debts, which stood at N1.1 trillion.
He added that the 2012 budget might not be different from the 2011 budget that was deficit financed, adding that substantial part of revenue had been set aside for deficit financing.

We enjoin our readers to send their reports, including pictures to ination@thenationonlineng.net
Posted by Crude Oil Daily at 2:16 PM