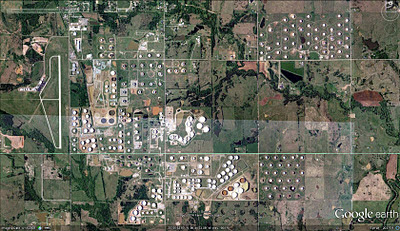 Crude oil inventories in Cushing, Oklahoma, fell 2.3 percent on Nov. 25 from Nov. 17, according to data compiled by DigitalGlobe Inc. (DGI)

Cushing is the physical delivery point for New York Mercantile Exchange oil futures contracts and the largest crude- trading and storage hub in the U.S.

The DigitalGlobe estimate is based on images of 236 operational floating-top tanks at Cushing, the satellite company said. The number of fixed-roof tanks at the hub is 81.

Some fixed-roof tanks in Cushing may have been retrofitted with internal floating roofs and may be used to store crude oil, according to Lipow.

When clouds obscure the satellite view, data is used from the last day in which there was a full collection. The highest percent of collection data will be used when cloud cover obscures images during a collection period.

To contact the reporter on this story: Aaron Clark in New York at aclark27@bloomberg.net

To contact the editor responsible for this story: Dan Stets at dstets@bloomberg.net

http://www.bloomberg.com/news/2011-11-28/cushing-crude-oil-stockpiles-fall-2-3-satellite-survey-shows.html
Posted by Crude Oil Daily at 11:19 AM