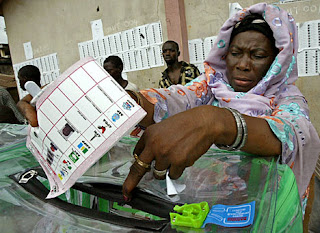 Nigeria’s President was missing for three months. Over 700 lie dead from an Islamic uprising; an estimated 1,700 have been killed in ethnic-religious violence in the city of Jos. One-third of the country’s oil output was cut by armed militancy, and nearly $40billion disappeared from the excess crude account.

All of this has happened in Nigeria over the last four years, as the country has struggled with one crisis after another – symptoms of the country’s corrupt 2007 election.

Strategically, Nigeria matters: it’s the fifth largest oil exporter to the U.S. With 150 million people, Nigeria is the most populous country in Africa and its economy is set to surpass South Africa’s as the largest on the continent in the next few years.

Nigeria sees itself as the ‘big man’ of Africa and the conventional wisdom holds that if you can get Nigeria right, the rest of sub-Saharan Africa will follow.

And yet, since a return to democracy twelve years ago after a history of successive military coups, Nigeria’s government has failed to deliver on its promises for the people.

Its average life expectancy is 47 years of age. 80% of the population lives on less than $2 a day. Education, healthcare and infrastructure have all collapsed. Despite its economic promise, the commercial capital Lagos runs on only a few hours of electricity a day.

A new chairman in the old chair?

If he gets it right, the new government may be more accountable to the people, improving security and investment in Nigeria.

In addition to overcoming logistical challenges, Jega must overcome peoples’ larger concern of corruption and rigging.

In the last state election held in January – widely regarded as a test-run for Jega’s reforms – CNN witnessed areas where no one was able vote. When asked why by CNN, Jega answered :

"No one is voting because in many areas people are taking the law in to their own hands - many of our officials have been attacked; many of our voting materials have been diverted in many of these places you are talking about so it cannot be our fault."

In April, Jega will not be overseeing one state election but the National Assembly, State and Presidential elections across thirty-six states.

At stake for the politicians involved is access to billions of dollars of oil money.

To put the level of corruption in Nigeria in some context – in Kenya, an estimated $3billion was stolen in 2009, according to the Ministry of Finance. Over the last four years, $40billion from Nigeria’s Excess Crude Account has disappeared in Nigeria. And despite record oil prices – no money has flowed back into the account.

Nigerian legislators are estimated to be the highest paid in the world, although no one knows exactly how much they earn. The Central Bank Governor recently suggested a quarter of the national budget is spent on the National Assembly, yet from 2009-10 the Senate has passed only 13 bills.

Perhaps most importantly, the Electoral Commission has been unable to keep in check party spending and this is by far the most expensive election ever held in Nigeria – perhaps Africa. Again, no one knows how much, but the cost likely runs into the tens of billions of dollars in monies paid and contracts promised to buy votes.

Challenge for the Challengers


The front-runner in the Presidential election is incumbent Goodluck Jonathan. He is the first President from Nigeria’s oil-rich, southern Niger Delta region. Once Vice-President, he assumed office after a constitutional crisis when, without any public information, the former president left for Saudi Arabia for 3 months to treat a kidney ailment and died last year.

But Jonathan’s decision to run for the presidency challenges Nigeria’s traditional powerbase – the north. A nebulous group of powerbrokers more clearly defined by the fact that northerners have ruled Nigeria for 38 of the country’s 50 year existence since Independence.

The April elections represent a potentially historic transfer of power from the north to the south.

But the north is not giving up without a fight. Jonathan’s main challenger is former military ruler, retired General Muhammedu Buhari. His party, the Congress for Progressive Change (CPC), has populist support across the north running on a platform of anti-corruption.

In the south too, Jonathan is also challenged by the largest established opposition party – the Action Congress of Nigeria (ACN) and their candidate, former chairman of Nigeria’s anti-corruption commission, Nuhu Ribadu.

Together the CPC and ACN dominate both the South-West and North-West – regions with the highest number of registered voters.

If they can stop Jonathan winning the majority vote and the 25% that he needs in two-thirds of the country’s 36 states to win, then they force a run-off - something unprecedented, extremely divisive, and also unlikely. The incumbent very hard to out-spend.

However, the concern of a run-off is that pitting a northern Muslim against a Christian southerner would stoke dangerous divisions in a country where tens of thousands have died in sectarian violence over the past fifty years between the Muslim north and Christian south.

But Nigeria is so big and the Presidency so remote, that it is the state elections that matter most to the majority of Nigerians, with some states running budgets and populations comparable to small African countries.

And it is the state politicians that are largely responsible for the arming of local militias and stoking ethnic-religious divisions to support their political ambitions.

In 2003 and 2007 elections, politicians in the Niger Delta armed young men to help them seize ballot boxes, kill opponents and rig the election in their favor.

With no jobs and a sense of marginalisation, these armed young men began to kidnap oil workers and attack oil facilities in the region, cutting oil production by a third and demanding a greater share of oil profits - a dangerous situation for a country dependent on oil for 80% of its budgetary revenue.

President Jonathan’s rise to power is widely regarded as an attempt to appease this Niger Delta militancy. And for the April elections, the militants have largely united behind Jonathan - a man they see as one of their own - and they have threatened more attacks if they feel Jonathan is cheated out of the presidency.

The harnessing of the militancy against oil facilities to aggressively pursue power sets a dangerous precedent.

And the lesson, it seems, is quickly being learnt.

Political assassinations, bombings, kidnappings and violent protests have already marred this years election campaigns; the seizure of illegal weapon and bomb caches by security forces is regular news as politicians race to arms their supporters; and in the last two years a murky, but major Islamic militant group has emerged in the North – known locally as Boko Haram.

But for the stricter enforcement of Sharia law across the north, Boko Haram’s aims are unclear, but its targets are obvious – with the killing of politicians and government officials on an almost weekly basis.

The last year has seen the rise of a small but vocal group of Internet activists spearheading attempts to bring transparency to the electoral system through their laptops and mobile phones.

Together with promises by the Electoral Commission Chairman that this will be a peaceful, free and fair election – it is hoped that the rot in the system can be reversed.

But the signs are not good.

President Goodluck Jonathan’s ruling party – the Peoples Democratic Party, or PDP has ruled Nigeria as a near one-party state since the country’s return to democracy 12 years ago. To keep itself in power it has overseen a succession of increasingly violent and corrupt elections. Come the April elections, those same politicians are unpopular and under threat

The scenarios for this election are on a sliding scale from wide-spread, localised violence to a peaceful election brought – or as some critics have suggested, bought – about by the mortgaging of the public treasury. Debts and favors owed that will hamper any serious future reform.

For the rest of the world – a stable election will help open for business a massive market of 150million people that will take the lead in developing West Africa. But a violent election will mean an unstable oil and gas ally that threatens to destabilize an already volatile region.

But for better or worse, like after the 2007 elections, the April elections look set to be a dramatic upheaval that will set the stage for another turbulent four years.
Posted by Crude Oil Daily at 11:18 AM