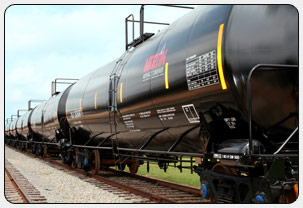 By Ilya Khrennikov and Ekaterina Shatalova

Oct. 26 (Bloomberg) -- Russia is set to move 40 percent of the state’s 475,000 rail cars into billionaires’ hands in the government’s biggest sale of transportation assets.

State-run OAO Russian Railways is offering almost 75 percent of its OAO Freight One cargo unit, owner of 192,000 railcars used to carry oil products, metals, fertilizers and coal across the country and for export. The auction is scheduled for Oct. 28 with a starting price of 125 billion rubles ($4 billion).

Russia ships 42 percent of its freight over the world’s second-longest rail network, with an average journey of almost 1,700 kilometers (1,000 miles). Putting Freight One into private hands may hasten upgrades of the fleet, said Elena Sakhnova, an analyst at VTB Capital in Moscow.

“The stakes are high,” Sakhnova said. “The winner will get about a quarter of Russia’s rail-freight transportation market.”

Russian Railways, formed from a government ministry in 2003, is losing market share to the upgraded fleets of large, non-state railcar operators. Last year, the rail monopoly’s share of cargo shipments dropped below 50 percent for the first time, according to its 2010 annual report.

The increase is slowing: Cargo volume rose 3 percent to 921.7 million metric tons in the first nine months of the year from the same period a year ago, Russian Railways said Oct. 3. That compares with 8.8 percent growth for all of last year. Moscow-based Freight One had earnings before interest, taxes, depreciation and amortization margin of 22 percent last year. That probably will climb under new ownership, VTB said.

Lisin and Timchenko’s jockeying may boost Freight One’s price as much as 15 percent from the starting level, said Alexey Rozhkov, an analyst at IFC Metropol in Moscow. Lisin has about the same influence in government as Timchenko, who is seen as an ally of Prime Minister Vladimir Putin, he said. Putin, 59, who was honorary head of a judo club founded by Timchenko in St. Petersburg, has said he isn’t involved in the billionaire’s businesses.

Russian Railways, whose prices are regulated by the government, started selling blocks of railcars and stakes in its cargo units last year. One was a $400 million initial public offering of almost 35 percent of OAO Transcontainer, to help fund a 1 trillion-ruble, three-year upgrade.

Lisin, Russia’s richest man according to Forbes magazine, and Neftetransservice, controlled by brothers Vadim and Vyacheslav Aminov, each acquired lots of 20,000 railcars.

Russian Railways retains 50 percent of Transcontainer, whose shares have slid 1.3 percent in London from its November sale price. The unit may be the country’s next big rail-industry offering.

Globaltrans, which decided not to participate in the auction for Freight One “due to global financial conditions,” will bid instead for Transcontainer. Lisin’s UCL Holding transportation company and Neftetransservice may also turn to Transcontainer, which focuses on container traffic between Europe and Asia, if their bids fail this week.

Neftetransservice is unlikely to present a challenge at the auction because of its limited access to the funds for the deal, Rozhkov said.

While the Freight One sale is aimed at opening up the market and encouraging investment in newer and better railcars, it may lead to higher tariffs for small customers without resolving bottlenecks and lack of cars that held up grain and coal cargoes this year.

A win by Lisin, whose OAO Novolipetsk Steel is Russia’s biggest steelmaker by value, may help solve the dearth of general-purpose railcars such as gondolas and boxcars used to carry coal and metals, while a triumph by one of the oil carriers may prolong the issue, Korolev said.

Putin ordered Russian Railways Oct. 15 to pull about 200,000 railcars leased to small operators and clear backlogs that had tied up grain and coal shipments. Most of the current 1,850 operators should be consolidated, leaving only five to seven of the largest and a handful of regional carriers, and the government needs to charge fines for idling railcars, Freight One Chief Executive Officer Igor Asaturov said last month.

Russian Railways is seeking the right to lease cars from non-state owners on demand to fight bottlenecks, a regulated price corridor within which it can lease cars, First Vice President Vadim Morozov told reporters today. The monopoly is in talks about the share of the fleet it will have claims on.

Lisin controls about $2 billion of transportation assets. Among them are seaports in St. Petersburg and Tuapse, shipping companies and Independent Transportation Co., which has 27,000 railcars to carry bulk cargoes and metals and is the country’s third-biggest rail carrier by market share.

“The new shareholder will have to work out a long-term plan with the government and shippers of socially important goods,” said Dmitry Korolev, head of the Railcar Operators’ Council, which includes Timchenko’s and Lisin’s rail units. “Determining a new tariff policy will be a priority.”

To contact the editor responsible for this story: John Viljoen at jviljoen@bloomberg.net
Posted by Crude Oil Daily at 12:03 PM