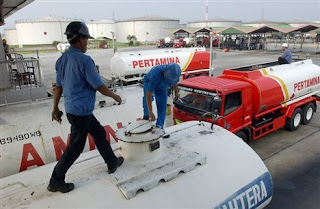 This development is coming at a time when government is planning to remove subsidy from petrol and, more so, at a time it is talking about economic transformation and diversification.

According to the report, the Indonesia Industry ministry’s director general for manufacturing, Pangah Susanto was quoted by Kompas.com, an online publication in Indonesia as saying that both countries have agreed to build the refineries in Indonesia. Details of the agreement were not released. Nigeria which at the moment produces 2.6 million barrels of crude per day was said to be looking for a partner to refine its crude oil Panggah was quoted as saying. He said that previously, Nigeria wanted the refineries to be built in Nigeria. However, as Indonesia is currently improving its down stream industry, it wanted the refineries built in Indonesia instead of Nigeria. The three refineries are being projected to produce 300 barrel per day and will be used to process crude oil from Nigeria. Indonesia oil firm PT Pertamina will buy the crude oil from Nigeria and process it in Indonesia.

Nigeria currently imports most of its petrol as all the local refineries are working far below capacity. Nigeria has an installed crude refining capacity of 445,000 barrels per day but the refining output is insignificant when compared to the national 32 million litres per day consumption. According to the pricing template of the Petroleum Product Pricing Regulatory Agency as at August 15, 2011, the landing cost of a litre of petrol is N129.21; the margin for transporters and marketers is N15.49; the expected pump price is N144.70; while the official pump price is N65. This means that the FG pays N79.70 as subsidy on each litre of petrol consumed in the country. With about 32 million litres of petrol consumed daily across the country, it also means the government is paying about N2.6bn as subsidy every day, which translates into N18.2bn per week and N72.8bn per month. Importation of petroleum products has been the source of subsidy that has generated controversy over its plan removal by the federal government.

Nigerian exports its crude oil and imports finished products. Its crude oil differentials were steady on Tuesday as prices found a temporary floor due to supply glitches in key grades in a market characterised by fading demand. Shell, one of the majors said its force majeure on Nigerian Forcados crude oil exports would be lifted by late October or November if all repair works went to plan. Traders said they expected the force majeure on Forcados to affect no more than 1-2 cargoes, or around 30,000-60,000 bpd. Shell has lifted the force majeure on its Bonny stream, declared on August 23.

“On the back of waning demand from the U.S., which saw total crude imports drop by almost 300,000 b/d month-on-month in September, less supply of Forcados may provide a floor, even though a steep drop in Bonny Light shippings was unable to prevent differentials from sliding,” said JBC Energy’s David Wech. Traders said that around 15 tankers for November loading were still reported to be available.

They are not really moving. Differentials are suffering a lot because of the weak margins and increasing freight. Also, buyers like Conoco are taking less,” said a West African oil trader.
Posted by Crude Oil Daily at 11:50 AM