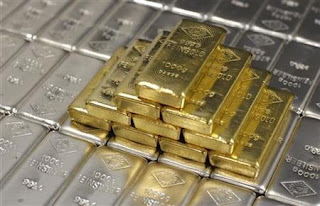 (Reuters) - Gold built on its earlier gains on Friday after Germany dispelled some of the doubt brewing among investors about the ability of European leaders to definitively tackle the debt crisis, which cut the dollar's advantage over the euro.

Disagreement between Germany and France, the biggest contributors to the euro zone bailout mechanism, over how to structure the fund to effectively stem the spread of the crisis has prompted investors to attach a diminishing chance of a resolution any time soon.

Gold rose to session highs after sources at the German government there are no serious differences between Germany and France and said banks' recapitalization should be decided at a meeting of EU finance ministers on Saturday, thereby boosting the euro against the dollar.

Dire warnings from ratings agencies over the impact on the creditworthiness of not just vulnerable euro zone members such as Spain, Italy and Portugal, but also others such France, have added to the desire among investors to hold non-euro assets.

Gold has increasingly performed like a risk-linked commodity and seen its correlation to European stocks reach its strongest in six months and that with copper rise to an 11-month peak. Yet it has seen strong demand from Asian consumers, which has pushed premiums to their highest since the start of the year.

"Gold is moving in line with other commodity asses and equities on a more positive sentiment about Europe," said Credit Suisse analyst Tom Kendall.

"How it will move depends on the headlines on Europe that we will see in the next few days. Buyers are still on the downside. It will take a little bit longer before we can see it move out of the $1,600-1,700 range"

The euro has fallen by 0.5 percent this week, while European equities .STOXX have lost 0.5 percent, compared with a gain so far of 0.3 percent in Standard & Poor's 500 futures.

Highlighting the investor pull out of gold this week, the price of bullion in most major currencies has fallen this week between 2.5 and 4.0 percent, while traded volumes in the most-active U.S. gold futures contract have run as much as 55 percent below their 30-day rolling average so far this month.

Investor interest in gold-backed exchange-traded products has materialized in a second consecutive weekly inflow of metal, with most inflows coming into European-based funds, which have added more than 135,000 ounces to their holdings this week.

This month, global gold ETF holdings are set for their largest net increase in three months, having risen by more than 170,000 ounces to 67.229 million ounces.

European leaders gather in Brussels this weekend to try to put together a comprehensive package of measures to keep heavily indebted countries such as Greece solvent and prevent the debt problem spreading to neighboring nations with fragile finances.

Uncertainty has put most asset classes under pressure this week and has clouded the outlook for the gold market, which relies usually on a degree of investor desire for relatively less risky assets in a turbulent market environment.

Gold's safe-haven properties have taken a backseat to those of the dollar as investors have shunned euro-denominated assets, which in turn has posed a stiff headwind to the bullion price, as this tends to benefit from a weaker U.S. currency.

"The question in everyone's mind is of course: 'how long will this phase last?' No one can know for sure, but we can identify at least two potential catalysts to watch that could help gold to reclaim its safe-haven status," wrote UBS analyst Edel Tully in a note, adding the catalysts were renewed dollar weakness and a breakdown in the correlation of gold with risk.

Silver, which can move in lockstep with gold but more frequently tracks base metals, has fallen 4 percent this week. It was last up 2.0 percent on the day at $31.11 an ounce.

Palladium was last up by nearly 5 percent on the day at $612.25 The price is still down 1.0 percent this week, as concern has increased over the outlook for demand, particularly following a soft read of Chinese economic growth, which is key for car sales in the world's largest auto market.

Palladium relies heavily on China as a source of demand for the metal in catalytic converters fitted in gasoline-powered vehicles.

(Additional reporting by Silvia Antonioli; Editing by William Hardy)
Posted by Crude Oil Daily at 10:28 AM