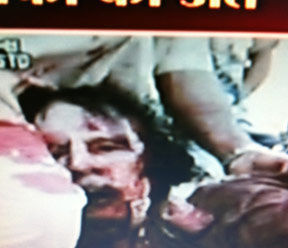 (Reuters) - Muammar Gaddafi was killed on Thursday as Libya's new leaders declared they had overrun the last bastion of his long rule, sparking wild celebrations that eight months of war may finally be over.

Details of the death near Sirte of the fallen strongman were hazy but it was announced by several officials of the National Transitional Council (NTC) and backed up by a photograph of a bloodied face ringed by familiar, Gaddafi-style curly hair.

"He was killed in an attack by the fighters. There is footage of that," the NTC's information minister, Mahmoud Shammam, told Reuters.

Western powers, who have backed the rebellion which took the capital Tripoli two months ago, said they were still checking. NATO said its aircraft fired on a convoy near Sirte earlier, but would not confirm reports that Gaddafi had been a passenger.

Several NTC fighters in Sirte said they had seen Gaddafi shot dead, though their accounts varied.

With a final declaration of the country's "liberation" from 42 years of one-man rule apparently imminent, and crowds firing in the air and dancing in the streets of Tripoli and Benghazi, Libyan television said NTC chairman Mustafa Abdel Jalil was about to address the nation.

The two months since the fall of Tripoli have tested the nerves of the motley alliance of anti-Gaddafi forces and their Western and Arab backers, who had begun to question the ability of the NTC forces to root out diehard Gaddafi loyalists in Sirte and a couple of other towns.

Officials said some of Gaddafi's entourage had been killed in the same incident, while his son Mo'tassim and other aides were taken prisoner. Another son, Saif -- long the heir-apparent -- was believed by the NTC to be still at large, possibly in the immense southern deserts of the Libyan Sahara.

The death of Gaddafi himself became perhaps the most dramatic development since the Arab Spring revolts that have unseated rulers in neighboring Tunisia and Egypt and threaten the grip on power of the leaders of Syria and Yemen.

"He (Gaddafi) was also hit in his head," NTC official Abdel Majid Mlegta told Reuters. "There was a lot of firing against his group and he died."

Mlegta told Reuters earlier that Gaddafi, who was in his late 60s, was captured and wounded in both legs at dawn on Thursday as he tried to flee in a convoy which NATO warplanes attacked. He said he had been taken away by an ambulance.

An NTC fighter in Sirte said he had seen Gaddafi shot after he was cornered and captured in a tunnel near a roadway.

The capture of Sirte means Libya's ruling NTC should now begin the task of forging a new democratic system which it had said it would get under way after the city, Gaddafi's hometown rebuilt as a showpiece for his rule, had fallen.

As potentially vast revenues from oil and gas begin to roll in again, Libya's six million people, scattered in towns spread across wide deserts, face a major task in organizing a new system of government that can allocate resources across long-competing tribal, ethnic and regional divisions.

Gaddafi, wanted by the International Criminal Court on charges of ordering the killing of civilians, was toppled by rebel forces on August 23, a week short of the 42nd anniversary of the military coup which brought him to power in 1969.

NTC fighters hoisted the red, black and green national flag above a large utilities building in the center of a newly-captured Sirte neighborhood and celebratory gunfire broke out among their ecstatic and relieved comrades.

Hundreds of NTC troops had surrounded the Mediterranean coastal town for weeks in a chaotic struggle that killed and wounded scores of the besieging forces and an unknown number of defenders.

NTC fighters said there were a large number of corpses inside the last redoubts of the Gaddafi troops. It was not immediately possible to verify that information.

(Writing by Jon Hemming, William Maclean and Alastair Macdonald; Editing by David Stamp)
Posted by Crude Oil Daily at 10:56 AM