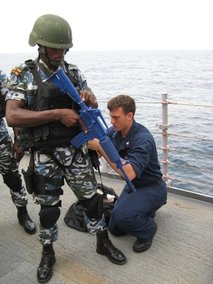 "These suspects, who were nabbed by our patrol teams at River Akassa were in the process of loading this vessel with illegally refined petroleum products. Presently, the oil vessel is detained at the government jetty in Yenagoa," spokesman Timothy Antigha told reporters.

He said 14 boats ready to offload the stolen petroleum products from the vessel were also impounded by the military during the operation on Thursday.

The seizure was the latest by the task force in recent weeks in the restive oil-rich region.

Last week, the military said it had arrested 50 suspected oil thieves in the past three months and destroyed some 2,000 illicit refineries this year in the region.

Influential Nigerians and the military itself have been accused of involvement in the lucrative illegal oil industry, which can include a relatively sophisticated level of theft and refining.

The military has denied involvement.

Stolen crude and illegally refined petroleum products have been exported and sold on the black market.

Oil firms blame theft and sabotage for the majority of oil spills in Africa's largest oil producer, a claim strongly disputed by activists.
Posted by Crude Oil Daily at 11:22 AM