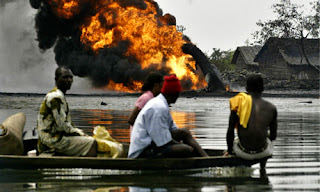 Chicago - A Nigerian tribal king filed a lawsuit in a US court seeking $1bn from Royal Dutch Shell to compensate for decades of pollution that sickened his people and damaged their lands, his lawyer said on Thursday.

The suit was filed a day after the US Supreme Court said it will consider a lawsuit accusing Shell of human rights abuses in Nigeria in a landmark case that could make companies liable for torture or genocide committed overseas.

That case will assess the potential liability of corporations - including multinationals with a US presence - under the Alien Tort Statute, a US law dating back to 1789 that scholars say was meant to assure foreign governments that the United States would help prevent breaches of international law.

The latest case alleges that Shell's Nigerian operations are "well below internationally recognised standards to prevent and control pipeline oil spills" because the Anglo-Dutch company "has not employed the best available technology and practices that they use elsewhere in the world".

It cited a recent United Nations report that found that contamination was widespread in the Nigerian Delta after 50 years of oil extraction left groundwater badly contaminated and the soil soaked with hydrocarbons to depths of 5m.

The suit was brought on behalf of the people of Ogale in the Eleme local government area, where the UN team found the most serious groundwater contamination and people drinking water laced with cancer-causing benzene at 900 times World Health Organisation guidelines.

Scientists found an 8cn layer of refined oil floating on the groundwater that served the wells. The oil was linked to a spill that had occurred six years earlier and was not properly cleaned up.

A spokesperson from Shell did not immediately return a request for comment.

The Nigerian plaintiffs said they decided to file the suit in a US court because of Shell's history of a "culture of impunity" and "disregard" for the Nigerian judicial process.

They note that the Shell has refused to comply with a 2005 order to end gas flaring in the Iwherekan community or to pay a 2006 judgment to pay $1.5bn to the Ijaw Aborigines for damages caused by decades of pollution.

Their community is "exposed to hydrocarbons every day through multiple routes" including frequent oil spills and pervasive air pollution from refining operations.

"At all times relevant to this litigation, Defendants knew or should have known that the crude oil contains chemicals hazardous to human health and to the environment and ecosystems," the complain said.

Shell is accused of cruel, inhuman or degrading treatment, gross negligence and the violation of international treaties and obligations to the United States and Nigeria.

The complaint also noted that Shell has "not taken any concrete steps to protect the environment, provide safe drinking water or subject the endangered people of Nsisioken Ogale Community to medical assessment and treatment" since the UN issued its scathing report in August.

In addition to the $1bn damages, the lawsuit also seeks immediate cleanup of the pollution and an injunction to require air and water monitoring.

The 32-page civil complaint was filed Tuesday at the federal court in Detroit, Michigan.